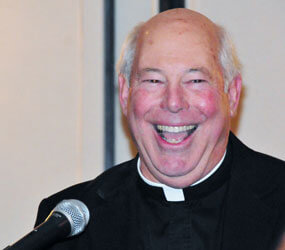 When Monsignor Richard Tillman arrived as pastor of St. John the Evangelist in Columbia in 1977, the young parish had been through a lot. Two of the Howard County faith community’s first three pastors had left the priesthood to marry.

“They were looking for someone,” Monsignor Tillman remembered, “who could bring a little stability there.”

The priest more than accomplished his goal.

The 71-year-old pastor retired Jan. 1 and is spending a few months in Florida before he plans to relocate to his home parish of the Church of the Immaculate Conception in Towson for his retirement.

“He has a very strong sense of seeing the goodness in everyone at all times,” said Eileen Kiefer, St. John’s director of liturgy and a friend of Monsignor Tillman for 33 years.

Kiefer said Monsignor Tillman was the perfect choice to lead a parish that shared facilities with other religious communities at the Interfaith Center at Wilde Lake and the Oakland Mills Interfaith Center. St. John was established in 1967 with a strong focus on interfaith understanding.

“He embraced the interfaith concept,” Kiefer said, “and took what we committed to enter into and made it flourish.”

Monsignor Tillman always had a keen interest in other religions, as his father was a Unitarian who later converted to Catholicism.

“I appreciate that God works in a number of mysterious ways that are very broad and inclusive,” said Monsignor Tillman, who served on the Central Maryland Ecumenical Council. “The Catholic Church fits in a world where there are other great traditions that need to be honored for their truths and spiritual insights.”

At St. John, Monsignor Tillman encouraged parishioners to listen to what people of other faiths brought to the table.

“I loved every minute of working in a setting where you rubbed shoulders with Protestants and non-Christians,” Monsignor Tillman said, adding that interfaith cooperation isn’t about trying to find one’s faith. “It’s about coming with your faith and expecting others to come with their faith. Let’s see what we can learn from our sharing.”

Monsignor Tillman, the oldest of five brothers, knew from a young age he wanted to become a priest. After studying two years at what is now Loyola University Maryland in Baltimore, he entered St. Mary’s Seminary on Paca Street.

After his 1965 ordination, he served at St. Philip Neri in Linthicum, St. Mary Star of the Sea in Baltimore and Holy Cross in Federal Hill.

Monsignor Tillman said he was very influenced by the Second Vatican Council, and that he relies on prayer to sustain him in his priesthood.

“Prayer was very essential in my life and it still is,” he said. “It’s our way of touching base with who we are and the work that God calls us to do in the world.”

The parish hosted a series of farewell events for the much-loved pastor, including a special Dec. 26 Mass.

In his retirement, Monsignor Tillman hopes to assist with Masses at St. John and Immaculate Conception. He’s also looking forward to getting in more fishing and golf. He will miss the day-to-day interaction with parishioners at St. John, a diverse community made up of more than 3,000 registered households.

“I’ll miss the family part of it,” he said. “It’s been overwhelming, the impact they’ve had on my life.”