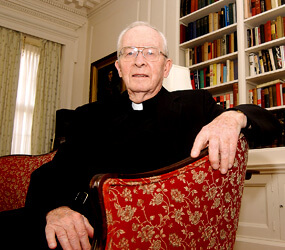 “This will give you an idea of how much he loved life,” Bishop Newman said with a laugh. “He said to me, ‘I’m not going to stop living just because I’m waiting to die.’”

Monsignor McGowan, the oldest priest in the Archdiocese of Baltimore and a man remembered for his passion for people, died Aug. 29 at Stella Maris Hospice in Timonium after suffering a stroke. He was 96.

Born in the town of Mohill in County Leitrim, Ireland, Monsignor McGowan was ordained a priest on June 20, 1937. His first assignment was in Askeaton, County Limerick, where he served for two years.

The young priest came to the United States in 1939 after Baltimore’s Archbishop Michael Curley invited him to serve in the archdiocese. His first assignment was at St. Gregory the Great in Baltimore, where he served from 1939-1943.

Monsignor McGowan volunteered during World War II as an army chaplain and served a basic training camp at Shaw Field in South Carolina before being assigned to the 817th Engineer Aviation Battalion in Florence. He was awarded a campaign ribbon with two battle stars for his service.

“You would send 20-30 planes out and five or 10 wouldn’t come back,” Monsignor McGowan recalled in a 2003 interview with The Catholic Review, “and that involved contacting the parents.”

After V-E Day, Monsignor McGowan was based in Foggia, Italy, and became part of the famous Second Bomb Group. He was discharged from the army in 1973 with the rank of lieutenant colonel.

The priest served as associate pastor of Immaculate Conception in Towson from 1946-1956. He took on the role of pastor first at St. Joseph in Midland from 1956-58 and moved on to St. Louis in Clarksville from 1958-67. His final pastorate was at St. Ursula from 1967-1989. Pope John Paul II appointed him a prelate of honor with the title of monsignor in 1982.

Bishop Newman noted that most priests are regarded either as “priest’s priests” or “people’s priests.” Not so with Monsignor McGowan, he said.

“He was both,” Bishop Newman recalled. “His life really revolved around his pastoral ministry and his deep love and concern for people and their spiritual lives.”

Bishop Newman remembered that his friend was “always great for visiting the hospitals and he had many friends.” He connected with parishioners by using his trademark Irish wit, Bishop Newman said.

“I feel badly for the young priests who haven’t had a chance to get to know him,” the bishop said. “He was a good model on how to be a priest in this day and age.”

Some of the changes at the Second Vatican Council were not easy for Monsignor McGowan, Bishop Newman said, but he accepted them out of his great love for the church.

“He saw the wisdom behind it – of anything that would help the church relate to the people,” Bishop Newman said.

Monsignor James P. Farmer, pastor of St. Ursula, said his predecessor at the parish “had a good mind for administration and finances.” Even after he retired in 1989, the former pastor regularly visited St. Ursula and kept in touch with friends.

“He retired 21 years ago and not a day goes by that people in the parish don’t talk about him,” Monsignor Farmer said. “He was a man of great ability and great charm.”

Monsignor McGowan was an avid golfer and continued celebrating Mass, hearing confessions and visiting the sick well into his 90s.

“I don’t just want to stagnate,” Monsignor McGowan told The Catholic Review in 2005.

Monsignor John L. FitzGerald, leader of the Apostleship of the Sea in Baltimore and a retired naval chaplain, said Monsignor McGowan offered helpful counsel over the years.

“My return to the archdiocese presented some challenges for me,” Monsignor FitzGerald said, “and it was Monsignor McGowan who provided his wisdom, time, encouragement, and, of course, his broad Irish smile and his dry Irish wit which never failed to put wind in my sails.”