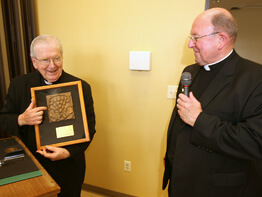 At only 9 days old Monsignor Edward Lynch was baptized at his home parish of Immaculate Conception, Towson, never knowing that one day he would become an associate priest and later pastor of the parish.

At a Mass June 10 Monsignor Lynch, the parishioners of Immaculate Conception and close friends, family, fellow priests and bishops celebrated the 50 years of service Monsignor Lynch has given to the Archdiocese of Baltimore.

The 77-year-old priest attended Immaculate Conception School and Towson Catholic High School and said he “owes much to the sisters who taught him.” After college he went to work in an accounting office and started attending daily 6:30 a.m. Mass. That is when the idea of joining the priesthood really “took off,” he said.

“I started observing the priests at my parish, and I thought gee what a wonderful thing they are doing, maybe I could do that,” said Monsignor Lynch with a smile.

He spent one year at St. Charles Seminary learning Latin and then he was sent to St. Mary’s Seminary and University, Roland Park, to study theology. After his ordination in 1957 he was assigned to Our Lady of Perpetual Help, Woodlawn, where he worked at the school and taught children to play basketball and baseball.

In 1962 he was assigned to St. John the Evangelist, Severna Park, where he taught and coached basketball. He was also involved in teaching religious education classes. In 1969 he came back to his home parish of Immaculate Conception and was assigned to the high school as a counselor and athletic director. He celebrated Mass at numerous nursing homes in the area, and he brought Communion to many Catholic patients at the local hospitals.

“I enjoy taking the Blessed Sacrament to others,” said Monsignor Lynch.

Monsignor Lynch was then given the challenge of helping start Our Lady of Grace in 1974 when he became pastor. While he lived at a retreat house, the parish held religious education classes at a local high school. As there was no church at the time, he started constructing a community building which they used for everything, including Mass, until a church could be built.

“I just enjoyed being a parish priest,” said Monsignor Lynch, who became pastor of Immaculate Conception in 1983.

He returned to Immaculate Conception just in time for the parish’s 100th anniversary.
While there he built a bell tower, moved the parish offices out of the rectory and removed the grass plot on the side of the church to make room for a bigger parking lot. He also enlarged the rectory by putting in two new apartments, and he remodeled the heating system for all of the buildings on the parish campus.

“I think, how did this happen,” said Monsignor Lynch about his 50th anniversary. “What’s the phrase? Time flies when you are having fun!”