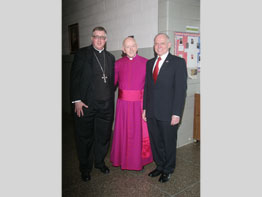 Monsignor Joseph S. Lizor Jr., the pastor of St. Luke, Edgemere, first thought about becoming a priest when he was in the fifth grade.

“I was very much impressed by the young priests we had in our parish. They were very good role models,” Monsignor Lizor said.

The Hagerstown native, who marked 50 years as a priest May 24, marked the jubilee June 22, with a Mass at the parish and a celebration in Perry Hall.

“Surviving 50 years is an achievement,” he said. “God has been very good to me.”

The celebration turned into a reunion for Monsignor Lizor and Dr. Peake. A U.S. Army chaplain for 22 years, Monsignor Lizor’s overseas tours of duty included time in South Korea, where then-Col. Peake was his commanding officer.

At St. Luke, his accomplishments include establishing First Friday and eucharistic adoration. He was named a monsignor in May 2006.

“It was something I never expected to see. It was a big surprise,” Monsignor Lizor humbly said.

During his decades as a priest, Monsignor Lizor said he has most enjoyed taking care of the spiritual needs of people.

Monsignor Lizor would advise young priests today that the priesthood is a great challenge.

“It’s more than a job. It’s a life commitment that’s full of satisfaction and achievements,” he said. “If I had to do it again I would.”

Those sending blessings and letters of congratulation to Monsignor Lizor include Pope Benedict XVI, President George W. Bush, Maryland Gov. Martin O’Malley and Archbishop William D. Borders. Monsignor Lizor also received a U.S. flag that flew over the Capitol May 24, the 50th anniversary of his ordination.

Carolyn Monette and Paul McMullen contributed to this article.