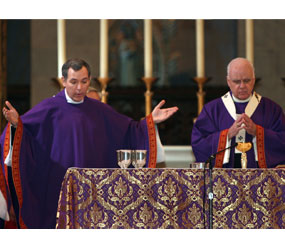 With two of his predecessors in attendance March 21, Monsignor J. Bruce Jarboe was officially installed by Archbishop Edwin F. O’Brien as the seventh rector of the Cathedral of Mary Our Queen in Homeland.

With the cathedral’s altar and crucifix serving as the backdrop, Archbishop O’Brien looked at Monsignor Jarboe and then to parishioners.

“My dear friends in Christ,” the archbishop said during the 11 a.m. Mass, “because I am aware of your pastoral needs and I am confident of Monsignor Jarboe’s qualifications of the office of rector, I now commend him to you as your new rector.”

The statement drew applause from the hundreds of people in pews and the 50-year-old rector politely acknowledged by waving and smiling. Monsignor Robert A. Armstrong, who recently retired after 25 years at rector, concelebrated with former rector Father Alphonse G. Rose.

The year has been a whirlwind of activity for the 50-year-old Monsignor Jarboe, who took over as rector of the cathedral in early January and was named a monsignor by Pope Benedict XVI in December. He was previously pastor of three parishes in Glen Burnie.

The installation Mass was to be held Feb. 13, but was cancelled due to the blizzards that hit the Baltimore area.

The cathedra, Archbishop O’Brien’s chair, sits inside the cathedral just mere feet from the altar. The archbishop reminded parishioners of its significance during his homily and said it is a sign of his teaching and pastoral care.

The building also serves another purpose, he said.

“The cathedral church is the most symbolic and significant structure in an archdiocese,” the archbishop said. “In a real sense, it’s everyone’s church, which the faithful of every parish have the right to call home.”

Archbishop O’Brien extolled the virtues of Monsignor Jarboe and asked him to always aim to make the cathedral a home for all who seek Christ.

“This is a most important day for the whole church of Baltimore,” he said. “In our new rector, we rejoice in a priest of proven pastoral experience, whose effectiveness in leading God’s people bears the hallmark of pastoral charity.”

After he concluded his homily, he asked parish clergy, leaders and staff to assist in Monsignor Jarboe’s task. Then, Monsignor Jarboe led the parish in the Profession of the Faith.

Although he has been rector for several months, the weight of the installation did strike Monsignor Jarboe.

“The ritual very much brings home the significance of the assignment, which is a motivation,” he said. “To have the archbishop’s clerical support and words of encouragement just means a lot,”

Dave Willis, vice chairman of the cathedral’s pastoral council, said the transition from Monsignor Armstrong to Monsignor Jarboe has been smooth and added that the new rector will be able to minister effectively to the parish, which also has a school.

“I think he brings calmness and stability,” Willis said. “It takes a special person to juggle all those balls, and I think he brings that ability. He has a good way with people. He’s very action-minded, which is great.”

Monsignor Jarboe said he has been overwhelmed by the support he has received thus far.

“People have been very warm and welcoming, the staff have been great to work and everybody’s been very eager and happy to me get settled in,” Monsignor Jarboe said. “I couldn’t expect anything more.”