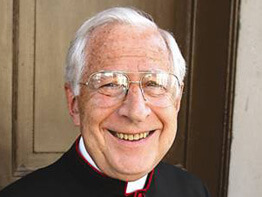 When parishioners of the Basilica of the National Shrine of the Assumption of the Blessed Virgin Mary began planning a special 50th anniversary celebration for their rector’s ordination, Monsignor James V. Hobbs initially resisted the commemoration.

“He’s a very gentle man and he doesn’t ever see the need to be in the spotlight,” said Michael J. Ruck Sr., a longtime parishioner of the downtown Baltimore church. “But, we told him that wasn’t acceptable. We wanted this celebration.”

With some reluctance, the humble 76-year-old Monsignor Hobbs relented and a special Mass and reception honoring his 50 years as an ordained priest commenced May 20.

Bishop Denis Madden – urban vicar for the Archdiocese of Baltimore – wasn’t surprised to learn of his colleague’s no-fuss attitude about the milestone anniversary.

“That’s so much in character,” Bishop Madden said with a laugh. “He’s contributed so much, but he isn’t the kind of man who would draw attention to it.”

Born in Thurmont, Monsignor Hobbs was educated by the Daughters of Charity at St. Anthony School in Frederick County and graduated from St. Charles School, Catonsville, before studying theology at St. Mary’s College on Paca Street in Baltimore and entering St. Mary’s Seminary, Roland Park, in the 1950s.

Ordained with 18 other priests on May 25, 1957, his first assignment was at St. Mary, Cumberland, where he served as an associate pastor for 15 years before becoming pastor of St. Rose of Lima, Brooklyn from 1972 to 1978.

From 1978 to 1992 Monsignor Hobbs served as an associate pastor at the Cathedral of Mary Our Queen, Homeland, before becoming rector of the Basilica, a post he hopes to hold until the day he retires.

To say his tenure as rector of the Basilica has been eventful would be understating the facts.

In the past 15 years, the basilica has seen visits from Pope John Paul II and Mother Teresa, a $32 million restoration, and the 60,000-plus visitors to the church since it re-opened to much fanfare in Nov. 2006.

“Monsignor Hobb’s contribution to the restoration was critical to the work that was achieved,” said Mr. Ruck, a Hunt Valley resident who is also chairman of The Basilica of the Assumption Historic Trust, Inc. “He labored over the details and made sure the liturgical structures were accurate.”

Though he has witnessed exciting events in his 50 years of service as a man of the cloth for the Archdiocese of Baltimore, it’s the celebration of Mass and the devotion to the Eucharist that brings Monsignor Hobbs the most pleasure in his profession.

“Knowing that you can bring Christ into the lives of other people is wonderful,” he said. “It’s been a precious gift.”

After turning 75 last year, he was required to present a letter of resignation to Cardinal William H. Keeler, the man with whom he shares a residence directly behind the Basilica.

Since he remains in good health, the cardinal said Monsignor Hobbs could continue to serve and they would revisit the retirement issue annually until its deemed time.

Though Monsignor Hobbs sees no reason to retire in the near future, he said that when the time does come, he will return to a house he owns in Thurmont and volunteer his services in the Western Maryland parishes.

“I just don’t see myself going to a home for retired priests,” he said. “I don’t think that’s for me.”