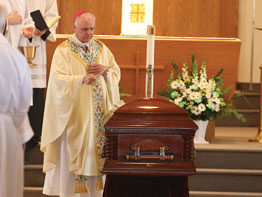 As pallbearers solemnly carried the casket of Monsignor James J. Cronin from St. Isaac Jogues at the end of the former pastor’s March 5 funeral, more than 75 priests and deacons waited outside the Carney church for one final tribute to a much-loved priest.

With their white albs and stoles snapping in sudden gusts of wind, the clergymen loudly sang “Salve Regina” – their voices undimmed by the blustery weather. Some of the priests attributed their vocations to Monsignor Cronin and many more said they were inspired by the priest’s example of unselfish ministry. This was their “thank you.”

“Jim Cronin not only led us at Eucharist, but he also showed us how to live out the Lord’s presence in our lives,” said Bishop Malooly. “Jim Cronin set a remarkable example of imitating the Lord in all that he did. Because he did it with such happiness and presence, we all learned much from him.”

Many of those who attended the funeral remembered Monsignor Cronin as a man of good humor who was genuinely interested in people. Father Stephen Hook, pastor of St. James in Boonsboro and St. Augustine, Williamsport, told The Catholic Review that Monsignor Cronin had a self-deprecating humor. Father Hook recalled a time 10 years ago when he was a seminarian assigned to St. Joan of Arc in Aberdeen, where Monsignor Cronin was in residence after his retirement. The two visited a nursing home that had a locked door that separated residents from staff. Because Monsignor Cronin was short in stature, when he tried to leave after visiting residents, only his face – and not his priestly collar – could be seen through a window in the door. As the elderly priest rapped on the door trying to get out, the staff wouldn’t let him through because they thought he was a disoriented resident.

“He just laughed and laughed,” remembered a smiling Father Hook. “He loved life, and he loved people. If anyone wanted to be a priest, he was the one you wanted to be like.”

Peggy Baumgartner, a parishioner of St. Pius X in Rodgers Forge, told The Catholic Review that Monsignor Cronin had a great Irish wit. He was the “life of the party and a good man,” she said.

“If you told him you had a problem, he would drop everything and always cheer you up,” she said.

“Our priesthood has suffered a great loss,” Archbishop O’Brien said. “We pray that the reward that he has earned will find him still our priest, making intercession for us and encouraging us to follow in his footsteps.”