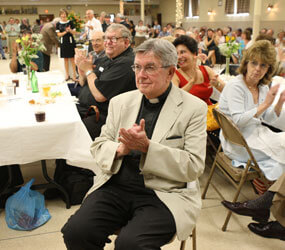 Friends added their spin during a good-hearted ‘roast,’ but much of what one needs to know about Monsignor William F. Burke was provided during his homily at St. Francis of Assisi June 7.

One can count on one hand the archdiocesan pastors with longer tenures, and the bond Monsignor Burke has to the northeast Baltimore community he has led since 1980 was apparent as it celebrated the 50th anniversary of his ordination.

He referenced St. Vincent de Paul, Martin Luther King Jr., Plato and Pope John XXIII. There were nods to the late Cardinal Lawrence Shehan’s 1960s pledge to ban discrimination in the church, and to social justice firebrands who have passed on.

Monsignor Burke, 75, mentioned being raised in predominantly Jewish northwest Baltimore, in a family that included his late sister, Helen, who gave 61 years to the Daughters of Charity.

There was also droll wit, one of his trademarks.

His homily elicited a standing ovation for a church that was packed with family, friends and religious, like Religious Sister of Mercy Katherine Bell, who has been the pastoral associate of St. Francis of Assisi since 1984.

“Monsignor Burke and I have a common love of working with the poor,”

Sister Kate said. “He’s influenced the parish in that direction.”

Monsignor Burke has been the archdiocesan director of the Catholic Campaign for Human Development since 1972. His parish has a spirit that adds to the stability in Mayfield and radiates to surrounding communities.

“People living in harmony, that’s what it’s all about,” Monsignor Burke said the morning after his celebration. “The vitality of the community relies upon the people who commit themselves to making it so.”

Fran Gast remains a parishioner, despite moving out of Mayfield in 1998.

“It’s the spirit here, and he’s the core of that,” Gast said. “My mom used to say ‘I’d buy him a new suit for Christmas, but he’d give it away.’ He’s just so down to earth. He’s everything a priest should be.”

Monsignor Burke was ordained June 28, 1959, at the American College of the Catholic University of Louvain in Belgium.

His first assignment was at St. Mark in Catonsville. He was also the pastor at St. Ann; St. Mary, Star of the Sea; and St. Elizabeth of Hungary in Highlandtown, urban assignments all.

The many concelebrants included Bishop William C. Newman and Sulpician Father Joseph Bonadio, who grew up in the parish and later served there.

Monsignor Burke concluded his homily with a few lines from a musical gem from his childhood, “I’ll Be Seeing You,” but the celebration was not just a look back.

Kevin Frye, the principal of St. Francis of Assisi School, spoke with excitement about a June 10 departure to Costa Rica for rising seventh- and eighth-graders, who will perform service there.

Monsignor Burke led a late 1990s effort that added a third floor to the school. Its pre-school has a lengthy waiting list. To keep those numbers going, longtime parishioner Bob Doerfler announced the establishment of the Monsignor William F. Burke Scholarship Fund.