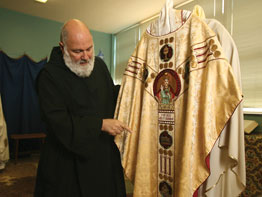 The balding Benedictine monk points to the image of Jesus in the center of the glittering gold vestment.

A tabernacle woven into the right of the garment symbolizes the Old Testament, Father Paschal A. Morlino explains. A church on the left represents the New Testament; seven fountains below, the Sacraments. The back of the vestment shows a pelican feeding its young from its own blood, as Christ feeds us.

Father Morlino, the pastor of St. Benedict, Baltimore, rescued the vestment and many more that had been slated to be discarded in Baltimore and well beyond. He amassed some of his collection of priestly garb through donations or purchases.

Now he displays about 40 vestments at St. Benedict in West Baltimore, where he serves as pastor. A handful of the vestments are draped over mannequins. Most hang suspended from the ceiling by thin wires, forming a kaleidoscope rich in history, image, and symbolism.

“I think I’ve accomplished something by salvaging them, passing them on to people and passing on what love went into making and fabricating these things by hand,” Father Morlino says. “I’m a great one for preserving stuff, especially historical things, and some of them are very historical.”

He found one vestment – a cream-colored gem with a gold cross pattern and a crucifix made of grape vines – in a heap about to be discarded from a building being torn down in Western Maryland.

Among his favorites: the baroque white vestment adorned with red roses, red tulips and yellow lilies. It goes back at least 200 years, and Father Morlino bought it from nuns at a Benedictine Monastery in Perugia, Italy.

To Father Morlino, the vestments are not merely the stuff of mostly hidden history: He not only displays them, but also wears them to celebrate Mass.

“I use them because I think of them as quite beautiful,” he says. “When you wear something that beautiful occasionally, it’s very uplifting. They were made to be used, not just to be stored.”

Father Morlino likes to wear the flowery Italian vestment during the Easter season.

For Christmas Midnight Mass, he dons vestments from a gold pontifical set – those once worn by bishops – that was donated by Visitation Convent in Washington.

“If you use those gold vestments with candlelight, it’s just magnificent,” he says.

The vestment collection offers a broad sampling of the colors and their symbolic meanings – for example, green for ordinary time; violet or purple for Lent; red for Palm Sunday and Pentecost; white for the Easter and Christmas seasons.

The display in a one-time classroom – the former St. Benedict school has closed – offers visitors other lessons too.

“They see the history of how vestments developed,” Father Morlino says. “I think it’s the historical development of liturgical vestments that’s important – you know, how they came to be like they are today.”

Vestments trace their origins to conical-style garments, so named because each is a

complete circle of fabric with a hole for the head, modeled after the toga. The vestment provided warmth in clothing common in the civilized Roman World, devoid of adornments, so it did not stand out when worn by early Christians who met in secret, usually at night, in catacombs.

The conical vestments of Roman times lasted until the eighth century, before gradually becoming more fitted. Vestments then shifted to a gothic form, shortened, more heavily ornamented with embroidery, crosses and religious symbols and adornments like tassels, hoods and collars.

St. Benedict parishioners have seen Father Morlino wear some of the vestments, he says.

But most of his flock, he says, has never seen the vestments like this, displayed in a room where they almost appear to float in midair.