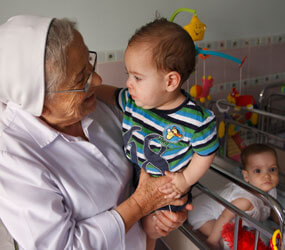 KARAK, Jordan – Comboni Sister Alessandra, the administrator of the Italian Hospital in Karak, knows what she’d do if she had a couple of million dollars.

The Italian-born nun would build a 15-chair dialysis clinic that could be used 10 hours a day, seven days a week. She also would beef up the maternity ward and infant care areas at the hospital.

“The water here is bad. People’s kidneys work hard” to cleanse the impurities in the water, she said. If the kidneys work too hard, dialysis becomes necessary.

A new birthing center and an expanded neonatal intensive care unit could help poorer mothers and their children get the care they need, Sister Alessandra said. Currently, the hospital averages about three births a day.

The needs, according to Sister Alessandra, are acute. Meeting the needs in Karak and elsewhere in the Middle East is problematic. There seems to be a perpetual shortage of money, and the number of sisters available for health ministry keeps shrinking.

Sister Alessandra is one of seven Comboni Sisters at the 38-bed hospital. Two of the seven are not Italian: One is from Sri Lanka, the other from Egypt.

At a maternity and infant clinic in the Jordanian city of Zarqa, about 160 women and children are seen each day. Most are Palestinian Muslims who grew up in a refugee camp a block away from the clinic.

The clinic bustles. Children received shots with an unrelenting frequency. A workshop on hygiene takes place in a stairwell – more than 20 women crowd in to listen and learn.

Sister Habiba Touma, a Dominican Sister of St. Catherine of Siena who spent 10 years overseeing the clinic before returning to her native Iraq in late September to take a leadership post with her order, said through an interpreter that the clinic “could make a profit.”

“But we don’t,” she added, “because we want the people to see who we are” as Catholics.

The clinic, staffed with two doctors – one male and one female – was to get a third doctor, another woman, because the new and expectant mothers often prefer to see a female physician.

In Bethlehem, West Bank, at the Ephpheta Paul VI Institute, the Italian-based Sisters of St. Dorothy have augmented their ranks with non-Italian sisters. Three of the seven nuns at the school, which educates 140 deaf children, hail from Jordan.

The school has outfitted all of its students with hearing aids and has paid for cochlear implants for 25 of them. Sister Pierluigina Carpenado, director of the Ephpheta Institute, said about two dozen students stay year-round at the school because of the distance to be traveled coupled with the potential of Israeli security checkpoints delaying or blocking their travel to the West Bank.

Next door to the school is Holy Family Hospital, which long ago stopped trying to be a full-service hospital. Instead, it has turned its attention to infants and children, as well as women in trouble.

In the region, honor killings still take place, and women are the most vulnerable. Sometimes women are at risk because they have gotten pregnant out of wedlock, said Sister Sophie Boueri, a Daughter of Charity from Lebanon who converted the hospital to its current use shortly after her arrival in 1990.

The hospital building has been used as a refuge for women under threat of violence, Sister Sophie said. Other times, it gives no clue about this particular mission, as newborns sleep peacefully in one room of the hospital and toddlers play indoors and outdoors in what has become a huge day-care center. The walls reverberate with the noise the kids generate; it is clear that this is no longer a hospital quiet zone.

In Jordan and the West Bank, the sisters explained that many of the children in their care have birth defects, the result of cousin marriage among Palestinian Muslims.

“They have a baby with a birth defect and they never think it’s because of intermarriage,” Sister Sophie said. “They just think, ‘Oh, it’s just one child. We’ll have another one.’ ”

The defects strain the already fragile budgets of families, governments and the private agencies that care for the children. Only recently, Sister Sophie said, have some Palestinians come to realize the ramifications of cousin marriage.

But attitudes are slow to change, she added, as Palestinians retain a clan mentality that they believe has served them well for generations.

Sister Habiba said the 75,000 Palestinians in the Zarqa camp may build up or build out as the clan expands, but they do not build infrastructure like sewer systems because such a display of permanence would be seen as a concession to Israeli occupation of their homeland since 1948. As a result, raw sewage flows through the streets of the camp, adding to the health woes.