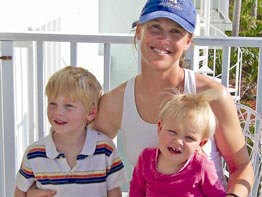 With four children and another one on the way, Sacred Heart, Glyndon, parishioner Denise Blair-Nellies is no stranger to creativity during the months of summer.
The Reisterstown resident said she loves summer and noted one of her children’s favorite pastimes is reading.

“We love to read books and share what we’re reading with each other in the morning or evenings,” she said.

She and the children, who range in age from 2 to 10, also enjoy outdoor picnics, visiting the local playground, going to the pool and taking inexpensive day trips to places such as the zoo.

No matter how many children one has, coming up with creative ways to pass the hazy days of summer can be sticky.

Therese Borchard, a 36-year-old Catholic News Service columnist and Annapolis mother of two, said that when the camp brochures arrive in March, she is often tempted to sign the kids up for weeks one through eight, “starting with a week of arts and crafts based on the theme of the solar system, ending with a tea party with Miss Spider.”

But the St. Mary, Annapolis, parishioner, whose children are 3 and 5, said she then remembers the advice of a fellow mom and writing friend, Muffy Mead-Ferro, author of “Confessions of a Slacker Mom.” Ms. Mead-Ferro said “to let the kids be kids in the summer – and that might be loafing around the pool.”

So this summer, Mrs. Borchard will send her son David to a soccer camp and Katherine to ballet camp, before heading for her sister’s farm in Michigan for a week-long family vacation.

Mrs. Blair-Nellies said her children like to visit a nearby stream with a bridge which they have dubbed the “Poohsticks bridge,” after a Winnie-the-Pooh story.

“We drop sticks in and then watch them go down the stream,” said Mrs. Blair-Nellies, chuckling as she said that none of the children have fallen in as of yet.

She said her family will also get together with friends and host a mini field day filled with balls, balloons, Frisbees and games such as tug-of-war.

The children also help coordinate sing-a-longs through their church at a nearby senior home and sometimes design cards for the elderly.

“We also try to go to daily Mass at least once a week,” said Mrs. Blair-Nellies. “Since the Mass is shorter, it holds their attention longer and they talk to their friends about the homily.”