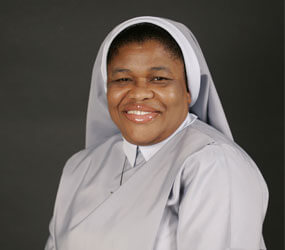 WASHINGTON – In generations past, Catholics in the United States sent missionaries to – among other places – Africa to evangelize its people and spread the Gospel.

U.S. Catholics still engage in missionary work in Africa, but now they are seeing more African-born priests and sisters ministering in the United States, and their numbers are growing.

“Each year we get more coming,” said Sister Joanna Okereke, a Nigerian-born member of the Handmaids of the Holy Child Jesus who serves as a program director in the U.S. Conference of Catholic Bishops’ Secretariat of Cultural Diversity in the Church.

The secretariat publishes a directory of African clergy and religious in the United States. “It could be 1,200, it could be 1,400,” Sister Joanna said, referring to the number serving in the country.

If he were told by his superiors “to someplace else, I will go there,” said Father Basfield Aguzie, 41, who is in Washington. A Nigerian-born member of the Missionary Society of St. Paul who came to the United States to study, he helps pay the tuition bills by serving as a Catholic chaplain at Howard University, one of America’s historically black colleges.

He and several other African priests and women religious talked about their ministry in the United States in telephone interviews with Catholic News Service.

At Howard, Father Aguzie has a daily schedule of late-afternoon confessions, rosaries and Masses, plus Stations of the Cross for Lenten Fridays.

Father Aguzie said he hadn’t experienced any culture shock – he had visited the United States once before coming in 2006 – but noted how Catholics relate to him differently.

“The problem lies in not being a parish priest, and I enjoyed that before. … In Nigeria, the priest is at the center of everything. If he says it, it is law. Here you find out it is more relaxed, and the parishioners organize activities,” he said.

Last year Father Alphonsus Enelichi, another member of the Missionary Society of St. Paul, became the first member of his order to become pastor at a U.S. parish when he was assigned to the predominantly black St. Martin de Porres Parish in Houston.

Talking about the need for African-American vocations to the priesthood, he said such vocations have to spring from the family.

“The priest cannot do it by himself,” Father Enelichi said. “The families are wanted to encourage (their children) to see the value of priestly and religious life. … African-Americans, they see (value in) their family more to bring them social excellence like (through) football, music. And now, many of them are going into education. … It’s got to come from the families.”

Father Callist Nyambo, a Tanzanian-born priest of 39 years who was incardinated in the Diocese of St. Petersburg, Fla., serves as pastor at All Saints Parish in Clearwater, Fla. He recalled the differences between his home and his new home, even though it has been more than 30 years since he came to the United States to study in Berkeley, Calif.

“You get language shock and different intonations and foods and weather,” he said. “Naturally there are differences and being away from people and those kind of things.”

Although Father Nyambo visits his homeland virtually every year, there are still aspects of Tanzania he misses. “Mainly the people back home, you know, the culture. But I’ve been here long enough to know the difference,” he said with a chuckle.

He said he would not consider himself a missionary in the strict sense of the word, because missionaries tend to work in teams. “You can call us missionaries in the sense we are evangelizing people,” Father Nyambo said. “Here we are a scattered few, here and there.”

Sister Christiana Onyewuche, a Nigerian-born member of the Eucharistic Hearts of Jesus order who is currently ministering in Boston, has been in the United States for five years, but hasn’t noticed any culture shock. “No, not really,” she said. “Like a missionary, you’re always on the move.”

Sister Christiana said there is “nothing” she dislikes about the people she serves or the country in which she serves. “They are good people, very, very special,” she said. “Except that I miss home. I miss Nigeria.” The last time she visited was three years ago, when her mother died.

Even Sister Joanna, in the United States for 12 years, considers herself “on mission” in her work. “When you finish your mission they send you back, but along the way we lose some” to the U.S., such as Father Nyambo, she said.

She remains aware of the differences between how Americans and Africans celebrate. “We don’t send invitations and count the number of people who say they will come,” Sister Joanna said. “You (just) cook for the village.”

That difference in celebrations is acutely obvious at Mass, she noted. “Right here, after Mass, everybody’s gone,” she said. “Another church I had (been assigned to), the Mass was so short. I said to myself, ‘When did we begin?’ The Mass just ended. At home, we take two hours, three hours at Mass. We come to celebrate.”