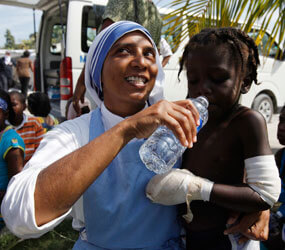 PORT-AU-PRINCE, Haiti – A group of children fidgeted, as children do, looking to be noticed as four Missionaries of Charity sisters gave them as much attention as they could, considering they were outnumbered more than 2-to-1.

But the barefoot sisters did not mind. They hugged and caressed the kids, none more than 7 years old. One young sister, her face adorned with a friendly smile, picked up the youngest child, a boy not yet 2, and held him in her arms. He seemed pleased to get the special notice.

It was after lunch and the children were out for a short walk to the main gate of the missionaries’ Haitian provincial house in one of Port-au-Prince’s poorest neighborhoods. Nearby, volunteers loaded medical supplies, food, tins of cooking oil and other goods for a trip to the countryside where victims of the severe Jan. 12 earthquake waited.

The children, and several dozen more, are under the care of about 20 sisters, twice the normal number. The extra nuns arrived in the days after the earthquake from some of the order’s other Haitian houses. In all, the order ministers at nine sites around the country: three in Port-au-Prince and six elsewhere.

One of the Missionaries of Charity, who asked not to be named in keeping with the order’s policy of not seeking publicity for themselves, said normally about 150 children live at the house. But the earthquake seriously damaged the children’s dormitory, so the sisters sent some of the children to other houses and set up makeshift sleeping spaces in the remaining four buildings.

For now, the children are fine and classes are resuming on a somewhat reduced scale.

“They’re OK because we are together,” the nun said.

Aside from the dormitory, the provincial house, located on a rocky, potholed street off Delmas 31, a main passage between the borough of Delmas and the Port-au-Prince airport, withstood all that the magnitude 7 temblor could muster even when most neighboring buildings did not.

But that does not mean that life at the provincial house remains unchanged.

“It’s different because there is more need,” the sister said.

“Every day, we are still having people to take to the hospital,” she explained. “We are trying to provide covering, tarps for the people.

She said for a few days after the earthquake several families camped at the compound, then moved to another location.

People left homeless by the quake arrive daily at the provincial house. About 20 people, including children, waited patiently outside the main gate to the compound Feb. 3, hoping to get a small amount of food to take to their paltry shelters several blocks away.

The Missionaries of Charity have managed to get enough food to provide 600 families with dry goods, such as rice and beans, the sister said. Another 600 families, those without the means to cook, have received prepared meals, she said.

The sister said about 20 volunteers worked at the provincial house at different during the three weeks following the quake, helping with the children, medical care or food distribution. With so many extra hands, the work of meeting the needs of the children and homeless earthquake victims, while challenging, is continuing.

“We have a lot to do, but we have people to help, so we are OK,” the sister said.