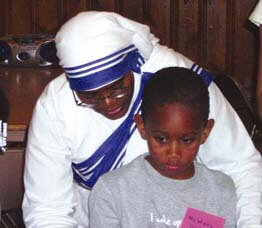 On a sweltering August morning, Matthew Walinsky leaves the sanctuary of the AIDS hospice at St. Wenceslaus, Baltimore, where he resides, to volunteer around the corner at the Missionaries of Charity summer Bible camp.

Though he appears robust, the 50-year-old former altar boy from St. Jane Frances de Chantal, Pasadena, suffers from a host of AIDS-related health problems that make the vigorous unpaid volunteer sessions a taxing labor of love.

“The sisters have been so good to me and have set such a great example of the amount of work we can all do if we have the will, that I’m more than happy to help out,” said Mr. Walinsky, referring to the six Missionaries of Charity who run several free programs in the community.

The Missionaries of Charity, a religious order for Catholic women founded in 1950 by Mother Teresa in Calcutta, are grateful for the presence of volunteers like Mr. Walinski at their three-week camp for about 60 children who live in a low-income neighborhood which has experienced a high rate of violent crime in the past several months, according to city crime reports.

“These kids are in desperate need of masculine love,” said Jeff Wright, another volunteer at the camp and a St. Wenceslaus parishioner. “Most of them have little – if any – male guidance in their lives and they really crave the attention of the male volunteers at the camp.”

The press-shy Missionaries of Charity traditionally doesn’t grant media interviews, because the women shun self-glorification and the sisters never solicit donations for their countless charity programs. They rely instead on divine providence to fill their coffers with contributions, said Sister Mary Manorama, M.C., superior of the Missionaries of Charity house in Baltimore.

However, in an effort to show the needs of the people the sisters help, The Catholic Review was permitted a unique glimpse into the tireless work they perform, Sister Mary said.

“These women are doing some amazing work for the poor and sick in our city,” said Bishop Denis J. Madden, urban vicar for the Archdiocese of Baltimore, who will celebrate 7 a.m. Mass in the sister’s chapel in their convent Aug. 22 in honor of the feast of the Immaculate Heart of Mary, patroness of the order. “Their contributions are significant.”

Cardinal William H. Keeler – who urged the sisters to establish an order in Baltimore to run an AIDS hospice in 1992 – will celebrate 8 a.m. Mass at St. Wenceslaus Sept. 5 in honor of the feast of the Blessed Mother Teresa.

A large photo of Cardinal Keeler and Mother Teresa together in front of the St. Wenceslaus convent shortly after the sisters opened their 10-bed hospice in 1992 hangs in the foyer of the building.

Colorful flowers in the window boxes and a stable new grotto affixed to the convent have added a splash of grandeur to the neighborhood and remind hospice residents of the beauty of God’s creations.

In addition to the hospice and Bible camp, the sisters and their 25-member volunteers corps also run an after-school program for about 10 neighborhood children during the academic year, visit death-row inmates one day a week, provide weekly companionship to patients at The Johns Hopkins Hospital, Baltimore, and residents at Ravenwood Nursing & Rehabilitation Center downtown, deliver groceries to shut-in neighborhood residents, and participate in organized prayer five hours each day.

“Dealing with the poor is not so easy today,” Sister Mary said. “You need your spiritual strength to do the work properly.”

“These women never stop working, yet they still have time to pray and show so much compassion to all of us in the hospice,” said Mr. Walinsky, a recovering alcoholic and drug addict who has reunited with a son he hadn’t seen in 15 years through the efforts of the sisters. “They teach us through example more than words.”
In the past 15 years, 102 people have died at the hospice and the 10 beds have always been filled, Sister Mary said.
In addition to the care and housing they provide the hospice residents, they also help them reconnect with their families and spirituality, whenever possible, she said.

“They are often very broken and unwanted by the time they come to us,” Sister Mary said. “We try to enrich their lives with the experience and love of Jesus and aid in the reconciliation with their families during their final days.”
With medical advancement in treating AIDS and HIV+ patients, many are living longer and some of their residents go on to live independently, she said.

The Missionaries of Charity take the traditional three vows of poverty, chastity and obedience required by most Catholic religious orders for women, and a fourth vow of wholehearted free service to the poorest of the poor, said Sister Mary, who like the other sisters in her convent , is a native of India.

With that fourth vow ever present, all of their services are free, including their structured camps and after-school programs, which are designed to provide the underprivileged children help with their homework, religious education and play and to help to keep them off of the streets and out of trouble, she said.

“We really try to teach them manners while they are with us,” said Sister Mary, sporting a saree, a traditional white habit with blue trim worn by religious women in India. “The structure is so important for them, especially at such a young age.”