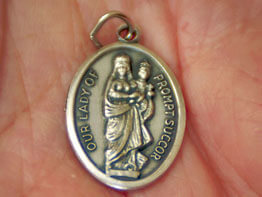 NEW ORLEANS – Ursuline Sister Kathleen Finnerty, superintendent of schools for the Archdiocese of New Orleans, knows the limitations of Catholic theology as well as anyone.

So when she mailed a small medal of Our Lady of Prompt Succor to the New York Giants president, John Mara, before Super Bowl XLII, she knew there was no way she could “guarantee” his team a victory over the heavily favored New England Patriots.

“I never guaranteed him anything, but I wrote in the note that I thought he could use a little extra divine intervention,” Sister Kathleen said. “I sent it off and completely forgot about it.”

Miraculous or not, the Giants, 11-point underdogs, shocked the previously unbeaten Patriots 17-14 on the strength of a memorable touchdown drive in the final two minutes engineered by New Orleans native Eli Manning. During the game-winning drive, Mara was caught on TV pacing in the owner’s suite of the University of Phoenix Stadium and reaching into his shirt pocket.

It turns out he was praying silently and touching the religious medal sent to him by the former principal of Resurrection Grammar School in Rye, N.Y., where Sister Kathleen got to know the Maras and their three young children from 1984 to 1991.

“He coached the boys and girls in basketball, and he was always at parish events and fairs and at Mass,” Sister Kathleen told the Clarion Herald, New Orleans archdiocesan newspaper. “The Maras were at all the events and activities where parents generally get involved. They’re wonderful. They’re a very strong family.”

When Pope John Paul II visited Giants Stadium in 1995, the Maras allowed Resurrection parishioners, teachers and students to use their luxury box.

“It was a terribly rainy day, and we left from school by bus and had VIP parking,” Sister Kathleen said.

When Sister Kathleen came to New Orleans from Delaware last August to become superintendent, she met Ursuline Sisters Damian Aycock and Joan Marie Aycock, who have a penchant for sports of all kinds and who have followed closely the careers of former New Orleans Saints quarterback Archie Manning and his two sons, Eli and Indianapolis Colts quarterback Peyton Manning.

It was Sister Damian who suggested that Sister Kathleen send the Our Lady of Prompt Succor medal to Mara after the Giants advanced to the Super Bowl.

“Sister Damian said before the game, ‘We have to get the ‘Lady’ on this,’” Sister Kathleen said.

For the Ursulines, who came to New Orleans in 1727 and opened the first Catholic school in the U.S., Our Lady of Prompt Succor has special significance because of two historic moments: The Ursulines prayed for her intercession in sparing their French Quarter convent during a massive fire in 1812, and they also prayed for a U.S. victory over the heavily superior British forces in the Battle of New Orleans in 1815.

In a way, the Patriots were believed to be as superior to the Giants as the British were to the Americans. But it didn’t work out that way.

“I love the Giants because they didn’t seem to have a chance against the Patriots,” Sister Damian said.

“You really and truly have to give Eli credit,” she added. “He himself doesn’t know how he got out of the grasp of those Patriot defenders and to throw that great pass, and yet he seemed to walk out of their grasp.”