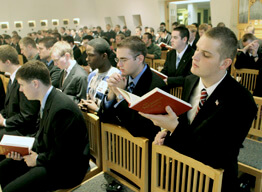 ST. PAUL, Minn. – St. John Vianney Seminary in St. Paul has increased its housing, its staff and what it demands of students. And the men keep coming.

The seminary’s enrollment is at an all-time high, with 154 men from 28 dioceses, making it the largest college seminary enrollment in the United States. It has more than doubled in size in the last six years.
Students at college seminaries are typically in their late teens and early 20s, studying for a bachelor’s degree and gaining background in philosophy. This precedes a major seminary, which is where seminarians study theology and work toward ordination. Not all of those in major seminaries have attended a college seminary.

“There is a strong heroic sense of calling among these young men,” said Father William Baer, St. John Vianney’s rector since 1998. “They have a love for the church and the Catholic faith that strikes them as a mission, a battle, an adventure.”

It’s no secret the seminary’s life is challenging. The men attend a 6 a.m. Holy Hour daily; they fast from technology – including phones and e-mail – on Fridays until the evening; they fast from the Friday midday meal; they undergo room inspections and maintain a tightly ordered schedule. They’re encouraged to embrace difficult studies with prayer, grow in fraternity with the other men, get in shape and face their social fears.

And the men rise to the occasion, said Father Rolf Tollefson, who is called a “formator.” He is also a spiritual director and lives with seminarians.

“The men don’t want to live a life of mediocrity,” he told The Catholic Spirit, newspaper of the Archdiocese of St. Paul and Minneapolis.

Matt Kuettel, 19, a freshman seminarian from Maternity of Mary Parish in St. Paul, said that seminary life is an adjustment.

“They throw a lot at you at once, they expect a lot of you,” he said. “A lot of times you’re more busy than you think you should be. But, if I had to do this all over again, there’s no doubt in my mind that I would. … They give you the skills and they give you the help to accomplish more.”

If the seminary were easy, a healthy man would leave because he wasn’t challenged, added Father John Klockeman, who also serves at St. John Vianney.

The local seminary’s enrollment upturn mirrors national trends, which indicate an uptick in the number of Catholic seminarians in undergraduate college programs, according to the Center for Applied Research in the Apostolate, based at Georgetown University in Washington.

Father Baer attributes the seminary’s growth to an increase in students coming from other Midwestern dioceses.

This year 35 of St. John Vianney’s seminarians are from the Archdiocese of St. Paul and Minneapolis.
This is the largest group of archdiocesan seminarians there in at least 25 years, Father Baer said. It’s also the largest number of college seminarians from any single diocese in the United States.

He credits the increased number to the support and dedication of Archbishop Harry J. Flynn of St. Paul and Minneapolis and the work of archdiocesan vocations director Father Tom Wilson, as well as parishes and families encouraging vocations.

“There is a renewed commitment to the Catholic faith by high school and college students,” Father Baer said, attributing the phenomena to events such as World Youth Day, more young people participating in eucharistic adoration, and vocation directors and bishops actively promoting vocations.

The number of men who attend college seminary and who are eventually ordained priests has also increased at St. John Vianney, Father Baer said, likely because the seminary has employed a more thorough selection and screening process and discourages men from “dropping out too early” before they develop a mature prayer life.

Although some dioceses are encouraging men to finish their regular college degrees and then go into a major seminary, a college seminary provides formation for men’s character and Catholic identity, Father Baer said.