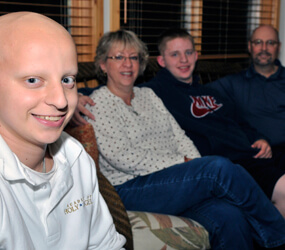 He could not have imagined making a pilgrimage with his family from Savage, Minn., to the New Orleans shrine of the Redemptorist priest, especially since he was extremely ill with a rare form of cancer that had returned after a short remission.

Even less expected was the life-changing outcome of that visit to the National Seelos Shrine — a testimony to the power of prayer and the possible intercession of Blessed Seelos. According to his doctor, Joey is now cancer-free and his family is eager to share the story of the apparent miracle.

In March 2008, Joey was diagnosed with midline carcinoma after having a walnut-size tumor removed from his chest.

“This kind of cancer is so rare that, by all accounts, Joey’s was the 14th case worldwide,” said his father, Paul Schwartz. “It has been classified as highly lethal and aggressive. Most cases don’t respond well to treatment.”

But after multiple rounds of chemotherapy and six weeks of radiation, a CT scan showed that his cancer was gone. “We really thought all our prayers had been answered and that Joey had cheated death,” his father said in an interview with The Catholic Spirit, newspaper of the Archdiocese of St. Paul and Minneapolis.

However, in early July, the family, members of St. John the Baptist in Savage, received devastating news. Joey’s cancer had not only returned, but he now had a quarter-inch tumor on his chest wall and more than a dozen small tumors in his lungs.

“In some ways, it was even harder to hear that than it was to receive the original cancer diagnosis,” said his mother, Melinda Schwartz.

Not long after, they first learned about Blessed Seelos from a family friend who had recently read about two cancer patients who said they had been cured of their disease after praying novenas to the priest.

Born in 1819, Francis Seelos was considered responsible for several episodes of healing during his priesthood. He served in Pittsburgh and New Orleans, where he died in 1867 from yellow fever. He was beatified by Pope John Paul II in 2000.

Paul Schwartz decided to order some material from the national shrine as well as a first-class relic from the Redemptorist priest — a medallion with a small bone fragment that Joey wears daily.

“After watching a DVD about Father Seelos, we all felt spiritually called to travel to New Orleans to visit the shrine,” Paul Schwartz said.

Soon after getting the go-ahead from Joey’s doctor, the family — which includes Joey’s twin brother, Derek — drove to New Orleans. Melinda Schwartz had called ahead and spoken to Joyce Bourgeois, the Seelos Center administrator.

During Mass at the shrine, Bourgeois laid her hands on Joey’s shoulders in prayer. Each member of the family felt “spiritually overwhelmed” by the experience, according to Paul Schwartz. Added Joey: “I don’t know how to explain it, but I did feel different.”

After a new CT scan in September, doctors were unable to detect any cancer in Joey’s lungs and said they believed the larger tumor spotted in July was likely scar tissue.

For now, Joey is continuing with his course of chemotherapy. “Nothing is telling us to stop that, and we’re going to go by what our doctor is saying,” said Melinda Schwartz.

At the same time, Paul and Melinda Schwartz truly believe Joey is cured. “It’s time for us to start talking about it,” she said. “God didn’t do this for our family for us to keep it a secret. We want to get the word out about Blessed Father Seelos.”

Meanwhile, a Maryland woman who was given six months to live in 2004 after a cancer diagnosis but whose disease was believed cured through the intercession of Blessed Seelos, died in October of pneumonia.

Because Mary Ellen Heibel, a parishioner of St. Mary Parish in Annapolis, died of pneumonia and not cancer, the investigation was to continue into the possible miracle involving her being cured. It was initiated by Baltimore Archbishop Edwin F. O’Brien and the findings will be sent to Rome as part of the canonization process for Blessed Seelos.

“In addition to being a very devoted wife and loving mother to her three sons and daughter, I believe God had a very distinct mission for her in the later years of her life – which was to play her part in making Seelos better known, and, God willing, advancing his cause,” said Redemptorist Father Byron Miller, vice postulator for Blessed Seelos’ sainthood cause.

“She sensed from God she had this special purpose,” said Father Miller, who celebrated Heibel’s funeral Mass Oct. 14. “She took that mission and ran with it.”