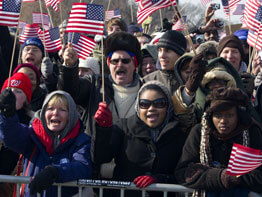 WASHINGTON – Sean Kilkenny of Philadelphia braved frigid temperatures, endured jampacked subway cars and got separated from his wife in the crowd of about 2 million on the National Mall.

But he said it was well worth it to see Barack Obama sworn in Jan. 20 as the first black U.S. president.

Bundled in a heavy green coat, thick gloves, wool scarf and blue ski cap, the 36-year-old attorney joined millions of other Americans on the National Mall adjacent to the West Front of the Capitol to cheer on the 44th president, chanting “Obama, Obama, Obama, Obama,” and furiously waving their miniature red, white and blue flags.

“I knew I had to be here, no matter what sacrifice I had to make to do it,” said Dana Dickey, 43, of Los Angeles, who embraced her 12-year-old son, Devon Moreland, as they shivered and watched the swearing-in ceremony. “We are witnessing history here. I want my son to remember this moment for the rest of his life.”

Some in the crowd had been waiting in line since 7:30 a.m. to pass security checkpoints along the parade route.

Once on the National Mall, they spread out blankets, gathered close to keep warm in the freezing cold, watched the big-screen monitors set up to view scenes broadcast from the Capitol steps, and reveled in their mutual enthusiasm for the historic event they came to witness.

Craig Thompson arrived from Columbus, Ohio, with his wife and four children at 2 a.m. on Inauguration Day.

“My wife said we had to be here,” Mr. Thompson told Catholic News Service. “This is history. We wanted our children to say they were here for the first (black president).”

Mr. Thompson was holding his 1-year-old son, Maxwell, while 6-year-old Miles kept his younger brother entertained as they waited in the cold sunshine.

“It tells them that anything is possible,” Thompson said. “Both my wife and I have advanced degrees. We tell our kids you’ve got to be tough and work hard.”

Claire Mott, 51, a member of Holy Family Parish in Newark, Del., said she did not want to miss the inauguration.

“We’re really going to get this nation back on track with Barack and Joe in place,” Mott said. “Everybody’s coming together, no matter what race, creed, nationality. We’re coming together. I’ve seen people of all nationalities today.”

George and Eva Madszar, members of St. Angela Merici Parish in Fairview Park, Ohio, said the National Mall was full of tremendous energy from the millions of people witnessing history.

“It was definitely a positive spirit,” Eva Madszar told CNS. “A lot of the people were very supportive of the change in office. I think people are ready for change.”

Spectators wearing Obama ski caps and Obama shirts carried signs that expressed their trust in the new president, while a few random bystanders held up posters that articulated their dissatisfaction with the voters’ choice in a new leader.

The Madszars were standing near the Washington Monument, where they experienced the powerful sight of the sea of people surrounding them, standing and cheering on the Mall.

After they got separated in the crowd, Kilkenny, who is in the Army National Guard and temporarily stationed in Virginia, and his wife had to watch the ceremony from different locations.

“Yes, all of this was a pain, but ultimately it was worth it to be here and witness the first black man to be sworn into office,” he said.

“I voted for (Sen. Hillary Rodham) Clinton in the primary because I didn’t think a black man could win the general election. I am so happy I was wrong about that,” he continued.

“I am Catholic, and I know a lot of the bishops didn’t want us to vote for Obama, but I think there are a lot of Catholics like me who knew this man was the right choice to lead our country,” he said. “It’s not that we don’t have faith in our church. We do, but we also have faith that Barack Obama has the right qualities to be a great president.”