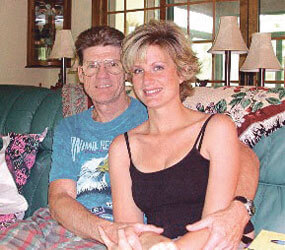 When a young mother named Jennifer McWhorter Thomas was dying of melanoma earlier this year – just 37 and beautiful, her family beyond panic but not tears – she asked her father for a favor.

“Nothing worked,” said her father, Bob McWhorter, “The day came when she was beyond the power of man.”

Jennifer, said McWhorter, “surrendered to the will of God. She had things she wanted to get done before she died and asked our help.”

One of the first tasks was to compose a letter to her husband and their three children.

“So weak,” said McWhorter, “she could barely sign her name.”

Before that, she asked her husband, Bryan – baptized Catholic but not reared in the faith – to make his first Communion. And later watched from a wheelchair, beaming, as he received the sacrament of confirmation; her mind at rest that their children – then 11, 9 and 3 – would have a strong spiritual guide in her absence.

At Jennifer’s Mass of Christian Burial in southern Maryland, a beloved and trusted priest read the letter that she had dictated to her father just weeks before.

And then she was cremated, reasoning that the cancer may have killed her but she would depart this veil by killing the cancer as well.

“Jennifer told us shortly before she died not to ask why,” remembered McWhorter, who daily mourns the loss with his wife, the former Rosa Marie Musumeci. “Not why she had cancer, not why God didn’t answer our prayers.”

She told her parents in her last days: “It’s bigger than us. The question isn’t “Why?”; but “what is he asking of us now?’ ”

He decided on a weekly recitation of the rosary at McWhorter’s home parish, Our Lady of the Fields in Millersville. The service is held each Tuesday evening at 7:30 p.m.

(McWhorter also strongly advises everyone to properly use sunscreen, whether at the beach or mowing the lawn. Jennifer was especially fond of getting a suntan, not only sunbathing at the shore but in the family’s backyard. She also visited tanning salons in winter.)

And while those who enter into the meditation of the mysteries welcome all who care to join them at the parish on Cecil Avenue, it is just as important that those who can’t make the trip to Millersville also petition the Blessed Mother and her Son to provide a cure for cancer.

The group’s website – curecancerrosary.com – says: “Wherever your worship place, please join us in this unified effort to storm heaven for a cure, for hope and encouragement.”

The introductory prayers to the standard decades of the rosary offered each Tuesday evening were composed by McWhorter, with input from his daughter in her last weeks.

Bob and wife Rosa were at Jennifer’s side as she underwent treatment at hospitals from Johns Hopkins in Baltimore to ones at the University of Pennsylvania in Philadelphia and Houston, Texas. The time spent together “gave rise to a number of the rosary bead prayers,” according to McWhorter.

Though Jennifer’s life was not spared, other “rosary bead prayers” made during the cancer services have been answered, said McWhorter. He added that he didn’t know how long it would take, but believes a “lasting, true cure” will emerge from the united rosary effort started in his daughter’s name.

“For the first time in my life,” he said of the experience, “I know the suffering (endured) by those with cancer, their family and their friends.”