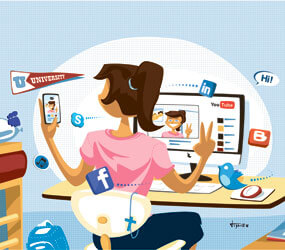 By the time you reach the end of this sentence, millions of young people will have changed their Facebook status, tweeted a photo and provided their precise location via Foursquare – all with a few keystrokes.

Privacy is passé for the Millennial Generation, Americans born between 1981 and 2000, who comfortably broadcast their lives to the world on a 24/7 basis.

“One of my friends is in a relationship and I found out about it on Facebook before she even told me in person,” said Meghan Sprankle, a freshman at Mount St. Mary’s University in Emmitsburg.

The Catholic Review is exploring the Millennial Generation in a series that will culminate before August’s World Youth Day in Spain.

In 2010, the Pew Research Center released a study of those 18 to 29 titled “Millennials: Confident. Connected. Open to Change.” About three-fourths have social networking accounts and one-fifth have posted videos of themselves online. Nearly 40 percent have tattoos. Given the generation’s openness to expression, those figures have most likely grown.

Reality shows like MTV’s “The Real World” have always been a staple for Millennials, who emerged from the womb with a camcorder in their collective face, as parents recorded their every move, from crawling to pee-wee soccer to sacraments.

Perhaps no one captures that nature better than pop singer Lady Gaga, 25, in her hit, “Born this Way,” which begins: “My momma told me when I was young, we’re all born superstars.”

Members of the generation believe anything is possible.

“The problem with Millennials, and I’m not excluding myself, is a sense of self-entitlement,” said Jon Oberst, 23. “We have everything we want. Everyone gets a car, a TV, computer and video games galore. It’s unlimited access to what we want.”

It’s not an uncommon criticism, but people who work with youths have a different perspective.

“I think they are perceived sometimes as unfocused ‘slackers,’ “ said Scott Miller, the Archdiocese of Baltimore’s director of the Division of Youth and Young Adult Ministry. “Nothing could be further from the truth. Given a compelling vision, (they) are wonderful collaborators in addressing what’s broken or hurting in the world or their lives.”

The most educated generation yet enters a job market with fewer options. According to Pew, more than 40 percent of work-eligible Millennials were unemployed in 2008. In contrast, the nation’s unemployment rate hovers near 9 percent.

Oberst, a parishioner of St. Ursula in Parkville, got a well-paying job after earning a marketing and advertising degree from Towson University.

“I was excited,” Oberst said. “I thought, ‘I’m going to make the money and the salary and I’m going to buy the things I want.’ In two weeks, I was fired. It was not a good job fit for me.”

“It’s all about how you accommodate Millennials in the workplace,” Snyder said. “They need exacting specifications. They need to know what they can do to get the ‘A’ and get the promotion. They want frequent feedback and to be told, ‘Yes, you’re doing well and here’s where you need to fix things.’ “

“In the Boomer generation,” Snyder said, “diversity was all about justice and equal opportunity issues. Millennials are much different. They’re like, ‘Oh, you’re different than me, come on in because I have this shape and you have that shape and together we can create a more concerted whole.’ “

According to Pew, compared to older generations, Millennials tend to be more accepting of homosexuals, interracial dating, the increasing role of women and immigrants.

Pew Research found that 66 percent of Millennials voted for Barack Obama in the 2008 presidential election. While they might be socially liberal, many don’t like getting caught up in political labels.

Demographers predict that Hispanics could account for almost 30 percent of the country’s population by 2050. Jessica Plazza, 23, of Resurrection of Our Lord in Laurel, and with family roots in Puerto Rico, sees that change every day.

Melissa Pelaez, of the Catholic Community of St. Michael and St. Patrick in Fells Point, sees young Hispanics bringing a new enthusiasm to the United States.

“We come from different countries, different cultures,” said Pelaez, 31. “We leave our families behind. It’s basically a new world. We come here looking for a family.”

“Nowadays, it’s violence, gangs, partying, drugs and drinking,” Cupps said. “That’s the main scene in high school. These kids (at the vocations event) are the ones who overcome and decide not to take part in that.”

The U.S. Centers for Disease Control and Prevention has found that nearly one-third of 15-to-24-year-olds had not had sex of any kind; in that age group, 27 percent of males and 29 percent of females had not lost their virginity.

A 2009 Associated Press poll found that 24 percent of 14-to-17 year olds had participated in sexting, the act of sending explicit sexual messages or photos via phone.

According to Pew, about 60 percent of Millennials were raised by both parents.

The generation told Pew that it places strong emphasis on marriage and parenthood, but while more than a third were parents, only 20 percent of those surveyed were married.

Some, like Mount St. Mary’s senior Teddy Burkhardt, want more guidance as they head into that conflicted future.

“We want something more grounded in tradition, in authority, something more profound than just fleeting pleasure,” he said. “It’s questioning the fun of the 1960s, 70s and 80s.”

Next: Is there such a thing as being too plugged in?