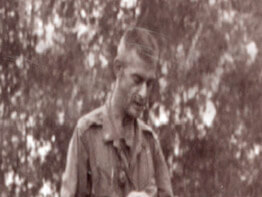 “This guy may have saved my life,” my good friend Lt. Col. Robert Dalton said to me as he sat down in my kitchen and placed a book in front of me recently.

“That guy,” replied Bob, a retired member of the United States Marine Corps and Davidsonville resident, as he then tapped his index finger on the book cover.

I looked down. “The Grunt Padre?” I questioned, now at least interested.
“Look down further,” Bob said, with a hint of continued annoyance.
I dropped my eyes to the bottom of the page and I saw the Congressional Medal of Honor.

Dalton smiled. “Father Capodanno was one of our chaplains in Vietnam.”
Then he opened the book to a photograph of a prayer service in a small Vietnam field. There he was, sitting on the ground as Navy/Marine Corps Chaplain Lt. Vincent Capodanno conducted the service.

Now Bob had my attention. What do you mean he “may have saved your life? I don’t get it.”

Bob told me he was a Lieutenant with the 2nd Battalion, 7th Marines at Chu Lai in January 1967. During prolonged jungle combat, he contracted Falciparum Malaria, the worst of all the malarias. He would not leave the battalion and fought a losing battle to the tiny parasite, eventually passing out in a coma with extremely high temperatures. Marines were usually evacuated to Japan, but because of the seriousness of his condition, he was sent to Cam Ran Bay, under Army doctors. He said he remembered waking up briefly and saw Capodanno standing over him before falling back into a coma. Three days later he woke up looking at an Army Special Forces Captain from Texas in the next bed.

“You are the ugliest Marine I have ever seen. I have never seen a Marine so puny in my life,” the captain said with a hint of a smile. Then he helped Bob to the bathroom and Bob looked at himself in the mirror. He was down to 134 pounds and told me he resembled one of the victims he had seen in the Nazi death camps from old World War II films.

A week later after going on a hamburger binge he was walking with one of the Army physicians. The doctor told him that the staff thought they were going to lose him. He told him the medication was not working and that they gave him five times the amount and that it must have worked.

Today, Bob Dalton has his doubts. He thinks that the only thing the medication did was damage his liver. He found out later that Father Capodanno came back when he was in a coma and gave him the last rights.

“I had the last rights from a very special priest,” he said. “That may have saved me.”

Over the next few weeks, I did read the book, written by Father Daniel Mode. I learned that Vincent Capodanno grew up on New York’s Staten Island. His parents were Italian immigrants, who, like most immigrants, worked hard to make a better life for their children. After Vincent graduated from Public School 44, he soon entered the Marynoll religious order to study for the priesthood. He would eventually be assigned to a remote section of Taiwan, but he felt another calling. He obtained permission from his superiors to become a Navy/Marine chaplain and was soon in Vietnam and assigned to the Marines.

Immediately, he revealed amazing courage, going with the troops to the battlefields to administer to the wounded and dying of all faiths. He was decorated with the Bronze Star for “his heroic achievement as Chaplain with the 1st Battalion, 7th Marines from May to December 1966 during operations Mobile, Franklin, Fresno and Golden Fleece.”

Now I reached the section of the book that gave me a big problem. Chaplains are unarmed and easily identified on the battlefield. An artillery shell doesn’t know exactly where it will land, but a machine gunner, especially one in close combat, can see his target. Vincent Capodanno was deliberately gunned down in September, 1967, in Quang Tin Province by an NVA gunner, who shot him 27 times along with a Marine corpsman and 14 others. There were also 31 Marines wounded in the battle that day.

Capodanno was awarded the Congressional Medal of Honor. The citation says how he left the relative safety of the command post. “Disregarding the intense enemy small arms, automatic-weapons, and mortar fire, he moved about the battlefield administering last rites to the dying and giving medication to the wounded. When an exploding mortar round inflicted painful multiple wounds to his arms and legs, and severed a portion of his right hand, he steadfastly refused all medical aid. Instead, he directed the corpsmen to help their wounded comrades, and with vigor, continued to move about the battlefield as he provided encouragement by voice and example to the valiant Marines. Upon encountering a wounded corpsman in the direct line of an enemy machine gunner positioned approximately fifteen yards away, Lieutenant Capodanno rushed forward in a daring attempt to aid and assist the mortally wounded corpsman. At that instant, only inches from his goal, he was struck down by a burst of machine-gun fire.”

Father Capodanno’s cause for canonization was initiated by the U.S. Archdiocese for the Military Services in May of 2006. Father Capodanno was declared Servant of God by Rome. The public declaration was made during the 2006 Memorial Day Mass held at the National Shrine of the Immaculate Conception in Washington, D.C., with Archbishop Edwin O’Brien as the main celebrant.

Terry McGuire is a parishioner of St. Mary of the Assumption, Upper Marlboro.