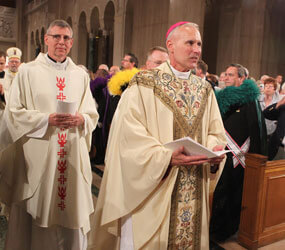 The sights, smells and sense of quiet from the days he spent searching the burning Pentagon for bodies after the Sept. 11, 2001 terrorist attack remain vivid in Bishop F. Richard Spencer’s mind.

Then a military chaplain and Baltimore priest assigned to the Pentagon, Bishop Spencer spent two weeks working with a Protestant minister and other chaplains in praying over dead bodies and offering consolation to those who had survived.

“We did not care if the person was male, female, a race or ethnic group different from our own,” said Bishop Spencer, an auxiliary bishop for the Archdiocese for U.S. Military Services who was ordained to the episcopacy on Sept. 8, 2010. “Each and every body and/or body bag received a blessing from both a Protestant minister and a Catholic priest.”

Since becoming a bishop, the Alabama native has visited 19 countries where U.S. military personnel and families are located. Remaining on active duty when he was elevated to bishop, he became the first military bishop able to enter war zones. He visited Iraq for 51 days during Advent and Christmas and returned to the Middle Eastern nation again for 46 days during Lent and Easter.

To commemorate the 10th anniversary of the Sept. 11 attacks, Bishop Spencer will be with the U.S. military community in Garmisch, Germany.

“My assessment of the mood among the troops as this anniversary approaches is one that is lived by continuous acts of selfless acts of courage,” he said in an e-mail interview from South Korea. “There is a firm resolve in defending innocent life and the common good against terrorism.”

Bishop Spencer, former pastor of Western Maryland’s St. Peter in Oakland, said no one should forget what happened10 years ago.

“We must pause in our daily routines each and every day to reflect on the sin and tragedies of not only these terrorist attacks on the United States,” he said, “but all terrorist actions throughout the world.”

The wounds remain deep and have not quickly or easily healed, he said.

“We ask a merciful God to receive those who have died, to heal a wounded people and to ask God of justice to give us the grace, wisdom and courage to help us to become truly instruments of peace,” he said.