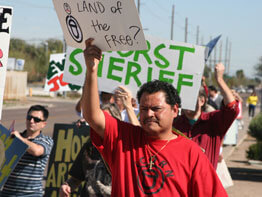 PHOENIX – As print and broadcast journalists watched and a news helicopter flew overhead, the Maricopa County Sheriff’s department marched some 200 undocumented immigrants in 15 minutes from the Durango Jail complex to a segregated area in the “Tent City” detention center.

According to Sheriff Joe Arpaio, the Feb. 4 move to the tent facility next door to the jail will help deal with overcrowding and rising costs.

“It’s easier,” the sheriff said before ordering the transfer. “They’re all up for deportation. As soon as they complete their sentence, they will be deported to the country that they came from.”

While the immigrants walked from the jail, chained at the feet and to each other, about 30 protesters demonstrated outside the facility.

“It was clearly a publicity stunt,” said Chris Fleischman, a parishioner at All Saints Catholic Newman Center. “If it was just an ordinary, run-of-the-mill transfer, he wouldn’t have attracted all of the cameras and all the protesters.”

The new location, surrounded by an electric fence, will be more secure, Sheriff Arpaio said in a Feb. 3 statement.

“This is a population of criminals more adept perhaps at escape,” the sheriff said. “But this is a fence they won’t want to scale because they risk receiving quite a shock – literally.”

The protesters were not amused.

“This was something that was beyond the pale – to publicly humiliate people,” Fleischman told The Catholic Sun, newspaper of the Phoenix Diocese. “It’s just not something you can sit by and let happen without raising your voice.”

Jason Odhner, who volunteers with No More Deaths, a humanitarian effort on the U.S.-Mexican border, joined Fleischman at the demonstration. He held a sign that read “No Human Being Is Illegal.”

“I hope that people can learn not to be afraid of their neighbors,” he said. “We need to learn to love each other in Maricopa County and I don’t think that’s too much to ask.”

“He’s segregating people. He’s parading them before the media,” she said. “Do you see him doing that to other inmates?”

An official at the U.S. Conference of Catholic Bishops told The Catholic Sun in a telephone interview from Washington that “from a distance it looks like the sheriff is going beyond the needs of law enforcement.”

“Shackling people and marching them before the public is not in keeping with the values that all Americans share,” said Kevin Appleby, director of immigration and refugee policy for the USCCB. “It’s sad that a law enforcement officer would subject people to that kind of treatment simply for publicity.”

“We’re going to demand that these stunts stop,” Ms. Wilcox said, adding that the transfer wouldn’t do much for rising costs. “We have to begin to fight back. No longer will we tolerate this.”