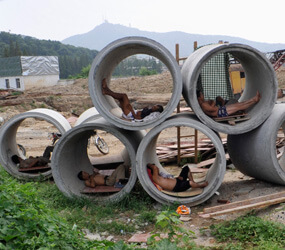 WASHINGTON – Pope Benedict XVI described migration as “a social phenomenon of epoch-making proportions” in his social encyclical, “Caritas in Veritate” (“Charity in Truth”).

He praised migrants’ contributions to the economic development of both their country of origin and their host country and criticized current policies and certain international organizations, including the United Nations, for excluding representation from the poorest nations when they hold summits on economic concerns.

For Johan Ketelers, secretary general of the International Catholic Migration Coalition, the pope’s encyclical offers up suggestions that will help shape a better world.

“’Caritas in Veritate’ calls for a rights-based approach and invites all to reconsider the link between justice, truth and charity,” he told Catholic News Service. “The encyclical raises the need for political commitment to establish global order and global governance respectful of human rights.”

The pope acknowledged social, economic, political, cultural and religious problems that arise from the migration issue and the challenges it poses to nations, but he called for policies that safeguard “the needs and rights of individual migrants and their families, and at the same time those of the host countries.”

“’Caritas in Veritate,’ in a visionary way, strongly invites us to think differently and invites us to contribute to the building of another more global and more humane world,” Ketelers said.

The pope recognized the significant contributions migrants make to the economy but warned they should not be treated or “considered as a commodity or a mere workforce.”

Ira Mehlman, national media director for the Federation of American Immigration Reform, agrees that immigrants should be treated humanely but his organization maintains the rising number of immigrants entering the United States is an issue of national security and that mass immigration drives down wages and can result in job loss for U.S. citizens.

The organization cites evidence from Rice University that estimates that more than 1.8 million U.S. workers are displaced from their jobs every year by immigrants.

“I understand the pope is the voice of moral authority and his concerns are based on charity, but in terms of international migration what is forgotten is the impact it has on education, health care and employment,” Mehlman told CNS. “The benefits of migration are mostly received by the migrants themselves, and the direct employers who gain a larger workforce. But this has an enormous impact on American citizens working in the same trades. Their concerns need to be taken into account as well.”

He said his organization is not anti-immigration, but wants to reduce the overall level of legal immigrants entering the country to a national level of about 300,000 annually.

Catholic officials, including Cardinal Roger M. Mahony of Los Angeles, have been key advocates for comprehensive immigration reform and are involved in a number of campaigns that educate citizens about the benefits of immigration and provide immigrants with services.

Cardinal Mahony has said he wants a path to citizenship for illegal immigrants but endorses deportation for those convicted of committing crimes and those who are members of gangs.

Mehlman said he was familiar with Catholic officials’ advocacy efforts but questioned whether their charitable contributions to illegal immigrants benefit U.S. citizens.

“The church is indeed a charitable body and gives its resources to those needing them, but it ceases to be charity when you have to tell a guy, ‘Sorry but your job is going to be given to a person willing to work for 25 percent less,’“ said Mehlman.

The cardinal and other immigrant advocates argue that the U.S. economy as a whole benefits from the labor, taxes and purchasing power of immigrants, including those in the country illegally.

Mehlman told CNS that his concerns regarding the nation’s educational system include overcrowding in schools because of rising enrollment and language barriers.

In terms of Catholic charity and immigration, Mehlman offered a solution he said has yet to be proposed by the Catholic Church.

“In many states, the dioceses are the second largest provider of education,” he told CNS. “What would be a great act of charity would be for someone to say the church will provide education for immigrants.”