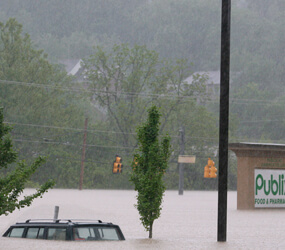 NASHVILLE, Tenn. – More than 15 inches of rain fell in some areas of middle Tennessee as May began, causing unprecedented flood damage in the area and killing at least 19 people.

Among those who perished in the floodwaters was 88-year-old Joseph Formosa, father of Bishop David R. Choby’s secretary, Mary Margaret Lambert, and his wife, Bessie Formosa, 78.

The floods have swallowed area neighborhoods, washed away roads, knocked out electricity and surrounded downtown landmarks such as the Country Music Hall of Fame.

Four counties have been classified as national disaster areas, and Nashville residents are under mandatory order to conserve water, as water treatment plants have been threatened by the floods.

Many families throughout the Diocese of Nashville have been affected and are working to clear out their waterlogged homes and assess the damage to their businesses.

For the most part, diocesan schools and parishes, including the most historic ones, escaped the floods unscathed except for minor damage. The chancery office had water damage on the first floor and had to pull out all the carpets, but no archives or valuables were damaged.

All Nashville-area diocesan schools were closed May 3, and individual ones were reopening throughout the week as they were able.

Teachers at Holy Rosary Academy in Nashville reported to work May 3 to assess the damage to their classrooms, one day after the bottom floor of the school took in several inches of water.

“We were lucky,” said Mary Hart, principal of Holy Rosary, walking through the school’s hallways in a pair of galoshes. The cleaning crew quickly pumped the water out and there was little evidence of flood damage, except for a trash bin full of wet carpets, papers and other supplies that were too soggy to salvage.

The floodwaters sent Pope John Paul II High School administrators scrambling to reschedule end-of-year plans, including graduation. The school’s May 16 graduation had been planned to take place at the Grand Ole Opry House, which sustained serious flood damage, along with the rest of the Opryland entertainment complex. The Opry House will be closed for several months.

The school’s athletic fields are under an estimated 6 feet of standing water, electricity in the buildings remains limited, and access to the school property is restricted by the floodwaters.

“I appreciate everyone’s flexibility and good humor during these troubling times. I hope students will use this unexpected time off to help out neighbors or friends who need their help to get out from under floodwaters,” JPII headmaster Faustin Weber wrote in an e-mail update to the school community.

When the floodwaters began to rise in Will Mix’s West Nashville subdivision May 2, he was helping neighbors move furniture to higher ground. “Then it started getting really bad … we had to swim people out on our backs,” said Mix, a senior at Father Ryan High School.

Mix and others spent the day rescuing neighbors, helping them escape as the overflowing Harpeth River gushed into the streets and into the first floor of many houses. With Mix was neighbor Stuart Magness, an administrator at Father Ryan.

“It’s a whole lot of damage here,” Magness said, “but the neighborhood has pulled together and people are taking care of each other.”

Nearby in the River Plantation subdivision, families were evacuated early May 2 as the floodwaters quickly rose. Around 7 a.m., “we threw a few things in a bag and left,” said Paula Proctor, director of pastoral activities at St. Henry Church.

Proctor and her husband, Al, were able to return to their home May 3, but it was a devastating site. All of the living room furniture had been tossed around by the water, family heirlooms stood warped, a thick layer of mud covered the floors, and the smell of mold already permeated the house.

“This was going to be our retirement home,” said Paula, 54. The Proctors planned to pay off their condo in less than 10 years, but now “I can’t imagine what we’ll do,” she said.

Proctor was thankful that she was able to recover almost all of her photos, yearbooks and other sentimental possessions, which were upstairs and undamaged. Downstairs, she said, “was stuff you don’t need and never used, just stuff.” When she returned to her home, she said, “all I want to do is get my memories out.”

Father Ryan senior Alex Wawa spent the day May 4 at River Plantation, helping anyone who needed it. His home wasn’t damaged in the floods, he said, and with school closed again, “I felt compelled to help.”

Magness said he was proud of his students, such as Mix, Wawa and others “who have really, truly stepped up to the plate” to help out during the flood recovery.