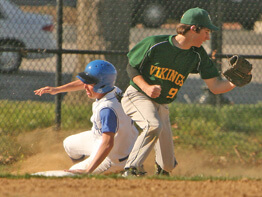 It’s been a cold start to the spring sports season, making it challenging at times for coaches to get the best performances from their athletes.

In fact, Our Lady of Mount Carmel, Middle River, head coach Mike Naunton is hoping that warmer temperatures will generate a little more offense from his Cougars this spring.

Naunton, in his 15th year at the school, is excited about the season but recognizes that after graduating five starters in 2006, and carrying only two seniors on a roster of 14 and five freshmen stepping into a varsity role, the 2007 team will most likely experience some growing pains as the season unfolds.

The Cougars are out to a 5-3 overall start, competing in the Maryland Interscholastic Athletic Association B Conference, opening the season with a new home field location at Renaissance Park, adjacent to the campus.

The team is led by junior Stephon Dingle, a sure-fire, three-sport athlete whose pitching prowess has landed the Cougars a solid effort from the mound thus far, as Dingle (3-2) has struck out 53 batters in 27 innings of work. Dingle’s meat and potatoes pitch is his fastball that hovers around the 83 mph mark.

Other key contributors this season include senior Eric Delinski and juniors Josh Sagan and centerfielder Kevin Eshman. Delinski bats third and is hitting .409. Delinski has also seen some time on the mound and carries a 1-1 record.

Eshman, batting .263, brings a lot of speed to the outfield as well as on the base path, with nine stolen bases on the year.

Sagan, a starting catcher, is batting a steady .389 with a most impressive defensive statistic, throwing out more than 50 percent of attempted steals thus far.

Despite the inexperience of this year’s Cougar club, the foundation of the team is strong and steadfast in following Coach Naunton’s emphasis on hard work, intensity, commitment and dedication to the sport, the program and the school.