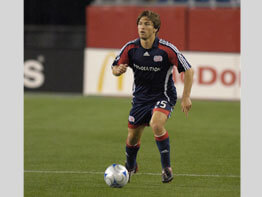 Chase Hilgenbrinck was happily living his dream of playing professional soccer for the first-place New England Revolution when he turned the ball over to God.

The 26-year-old Illinois native retired from the Major League Soccer team in July to begin studies for the priesthood at Mount St. Mary’s Seminary in Emmitsburg. If he completes his requirements, he will be ordained for the Diocese of Peoria, Ill., in six years.

Handing in his cleats for a collar wasn’t easy for the 163-pound former defender. He had played soccer since he was 5 and was poised for a long and healthy career. Ultimately, he believes, God demanded the sacrifice.

“I wanted to finish my soccer career first and then go into the seminary,” said Mr. Hilgenbrinck, who has been at Mount St. Mary’s since September.

God sent him a message to stop delaying, Mr. Hilgenbrinck said, when he was reading a spiritual book and came across this sentence: “Delayed obedience is disobedience.”

“It really hit me that I couldn’t put it off any longer,” he said. “I didn’t want the call to pass me up. The more I talked to God about it, the more I saw it was the only way I was going to be happy.”

Mr. Hilgenbrinck was nervous about telling his teammates, unsure how they would take it. When he finally did, they bombarded him with questions about the priesthood and shared their own faith stories.

“Their reaction showed me how hungry our society is for faith,” he said, noting that some of his teammates had participated in Bible studies. “It reaffirmed my decision.”

Mr. Hilgenbrinck admitted being shocked by the media attention his story has received. Journalists from several states and countries have interviewed him.

While he had discerned the call to the priesthood for many years, the former altar boy said the idea became more real when he was playing professional soccer in Chile after graduating from Clemson University in South Carolina in 2004. His prayer life intensified while living in South America, he said, and he wanted to devote his life to God and serving others.

Today, Mr. Hilgenbrinck prays a daily Holy Hour before the Blessed Sacrament – a practice he strongly recommends for others considering the religious life.

“You have to be patient with God,” Mr. Hilgenbrinck said. “He will definitely give you an answer. If you think you’re called to the priesthood, you probably are.”

“He was very concerned that the other members of the team who had been there much longer should get their chance to shine more than he did,” Monsignor Rohlfs said. “He tried to get the ball to them to score the goals.”

Playing for the seminary takes him back to his college days when Mr. Hilgenbrinck was a soccer standout for the Clemson Tigers.

“It wasn’t playing for money or a contract,” he said. “It was a beautiful experience.”

Cultivating a well-developed faith takes the same kind of hard work and determination as becoming an athlete, Mr. Hilgenbrinck said.

“It takes perseverance,” he said. “You have to practice all the time to be on top of your game.”