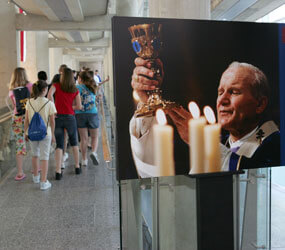 WASHINGTON – A Michigan religious order experiencing rapid growth since its formation in 1997 is planning to buy the 10-year-old Pope John Paul II Cultural Center across the street from The Catholic University of America.

The Ann Arbor-based Dominican Sisters of Mary, Mother of the Eucharist signed a purchase agreement with the Archdiocese of Detroit to buy the 100,000-square-foot center in Washington and use it as a house of study for its members.

No purchase price for the 12-acre property was disclosed. The property was valued at $37.3 million for the 2011 tax year during the most recent real estate appraisal.

Its proximity to the well-established Dominican House of Studies and the Basilica of the National Shrine of the Immaculate Conception makes it an attractive site, said a spokeswoman for the order.

Sister Maria Gemma Martek, superior of the motherhouse in Ann Arbor, said the hope is that the center can be developed into a house of studies for sisters.

“This is an exciting possibility,” she told Catholic News Service. “The idea of being able to potentially have a presence in our nation’s capital in such a great location in proximity to Catholic University, the Dominican House of Studies and the basilica.”

She said architects are going through the facility to determine if it can be remodeled to incorporate living space, a kitchen, a chapel and other needs for a religious community.

If all goes well, she explained, the order hopes to close on the deal by the end of the year.

The order has grown from four to 113 members since it was founded in 1997. With members’ average age of 26, the order welcomed 22 young women into its novitiate in September, she said.

The rapid growth has forced the sisters to look elsewhere to house and train members. Leaders had begun searching for a new location for a second motherhouse when they learned that the cultural center was available, Sister Maria Gemma said.

The idea for a Catholic center in Washington honoring Pope John Paul II was conceived in 1988 by Cardinal Adam J. Maida, then bishop of Green Bay, Wis., and was unveiled during his tenure as archbishop of Detroit. His admiration for Pope John Paul led him to envision a place where Catholics could explore their faith and church teachings.

Eventually, the concept evolved to become a cultural center where classes on Catholicism and Catholic theology could be conducted, lectures held and studies on Catholic culture could be undertaken.

The center, which cost $60 million to build, has experienced financial difficulties throughout its history. Because of low attendance rates, center officials in 2006 discontinued museum activities and shifted the center’s focus to a place of scholarly research on the concepts in Catholic thought laid out by Pope John Paul. It continues to display personal memorabilia, photos, and artwork from the late pope.

The center is now overseen by a foundation chaired by Cardinal-designate Donald W. Wuerl of Washington.

Ned McGrath, director of communications for the Detroit Archdiocese, declined to comment on the pending sale except to say that local church officials were “very happy for the sisters and we hope and pray like they do that this closes and the deal goes through.”