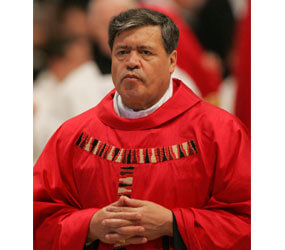 “On the eve of the holy celebrations of Christmas, one time more we have watched with impotence, pain and consternation as the Mexico City Assembly has approved an immoral law that tears at the most intimate of structures, the Mexican family,” Cardinal Rivera said after the assembly approved the bill Dec. 21.

“This law … has opened the door to a perverse possibility that these (same-sex) couples can adopt innocent children,” the cardinal added. “This, of course, is absolutely inadmissible and condemnable.”

The Democratic Revolution Party advanced the law through the local assembly. Mayor Marcelo Ebrard, a member of the party, was expected to sign the bill into law.

The legislation expands on a 2006 same-sex civil partnership measure that gives homosexual couples extended legal benefits. It changes the definition of marriage from the union of a man and a woman to “the free uniting of two people.”

The National Action Party questioned how far those new rights would extend, however, and insisted that the law deceived homosexuals since it remained uncertain if same-sex couples would qualify for federal benefits that provide health care and pensions for Mexican workers.

The party also promised a court challenge for the new law, which was passed after two hours of debate, according to local media reports.

Armando Martinez Gomez, president of the College of Catholic Lawyers of Mexico, had called for a referendum on same-sex marriage, but the assembly rejected the idea.

Public opinion surveys in Mexico City have found the public split 50-50 over same-sex marriage. Only 29 percent of those surveyed earlier this fall by pollster Maria del las Heras for the newspaper Milenio favored allowing same-sex couples to adopt children.

The original bill presented to the assembly did not include adoption rights. That measure was proposed by a Democratic Revolution Party member at the last minute and was approved by the full assembly.

The Democratic Revolution Party has championed the decriminalization of abortion and liberalized euthanasia rules. Those stances have strained relations between the local government and the Archdiocese of Mexico City.