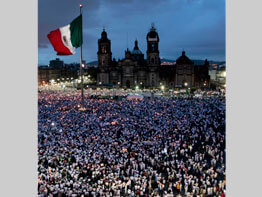 MEXICO CITY – Manuel Ramirez last saw his daughter Monica in December 2004, shortly before she was kidnapped in this sprawling metropolis of more than 20 million people.

The family physician found out about the crime through a text message sent from her cellular phone, demanding a $25,000 ransom. A second message advised the father of three, “Prepare to live without her.” The final message, he recalled, “threatened to cut off her fingers.”

Mr. Ramirez still carries the same bulky cellular flip phone that received the original messages, hoping to receive some news on Monica’s whereabouts. But it’s been more than three and a half years since the last message.

“We never thought that we could be (victimized),” he said. “It’s completely changed our lives … changed everything.”

Mr. Ramirez and his extended family joined more than 100,000 protesters in Mexico City Aug. 30 for a march that demanded an end to a wave of violent crime and kidnapping that is engulfing the country. Thousands more demonstrated in other large cities throughout the country.

The Mexican attorney general’s office reports that kidnapping is up nearly 10 percent so far this year, but citizen groups say the crime is underreported because many victims prefer not to deal with the police, who often are complicit in kidnappings.

In Mexico City, marchers streamed through the central streets of the capital dressed in white. Many carried photos of missing loved ones. Others held placards reading “Enough!”

Mr. Ramirez was clutching a poster of his missing daughter. His wife and her relatives – all members of a well-known family of circus performers – dressed in clown costumes and carried a large canvas bearing Monica’s photo.

When darkness fell, the marchers lit candles and concluded their protest by singing the national anthem. The bells of the Metropolitan Cathedral rang three separate times that night.

“They will ring … as a sign of the grief and suffering by the innumerable victims of crime, organized crime and narcotics trafficking … and as a symbol of painful solidarity with the families that suffer the bitter (loss) of a loved one being kidnapped,” said an Aug. 29 statement from the Archdiocese of Mexico City.

The bells also sounded as an expression of hope that the perpetrators of such crimes could turn their lives around.

Much of the current outrage over kidnapping began with the abduction of 14-year-old Fernando Marti, whose body was discovered July 31 in the trunk of an abandoned car in Mexico City. His family, the founders of a sporting goods retail chain, had paid a ransom.

The case received enormous media coverage, which analysts say revealed class schisms: The problems of the wealthy often draw attention while the problems of the middle and lower classes, groups frequently victimized by kidnapping, tend to go unreported.

Mexican President Felipe Calderon, the country’s 31 state governors and the mayor of Mexico City convened a high-profile security summit Aug. 21 that produced promises to take action, but organizers of the recent anti-kidnapping marches told politicians to stay away.

The struggles with the police, the anonymous threats over the family’s willingness to protest in public and the anguish of losing a daughter have been difficult, Mr. Ramirez said, but love for Monica has kept the family motivated.