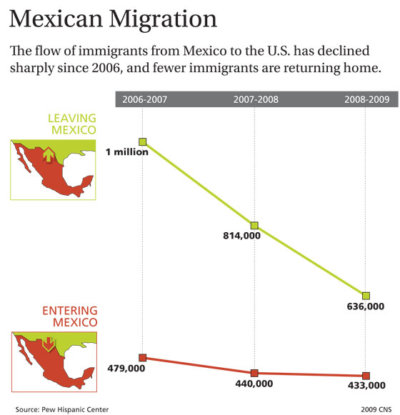 WASHINGTON – Mexican immigration to the U.S. has continued to dwindle this year after being down at least 40 percent from 2005 to 2008, according to a July analysis released by the Pew Hispanic Center, a nonpartisan research organization.

Despite the decrease, the study shows no increase in the flow of immigrants returning to Mexico.

“There have been sizable decreases in Mexican inflow before but not of this magnitude,” Jeff Passel, senior demographer of the Pew Hispanic Center, told Catholic News Service in a phone interview.

The analysis relied on data from population surveys taken in Mexico and the U.S. as well as figures from the U.S. Border Patrol, all of which pointed to similar conclusions regarding Mexican migration to and from the U.S.

Passel told CNS, “In the 2002 to 2003 recession, the number of Mexicans entering the U.S. dropped by about 30 percent. We have seen Mexico’s numbers go up and down with the state of the U.S. economy.”

He added that the center has seen inflow decreases among other Latin American immigrants, aside from Mexicans, which also have coincided with the United States’ weakening economic stability.

Reshma Shamasunder, director of the California Immigration Policy Center, told CNS: “It’s difficult to say why the numbers of Mexican immigrants coming to the U.S. are declining. I can only speculate the current recession has had an effect on Mexicans thinking about coming to the U.S.”

But if the current financial climate is deterring prospective Mexican immigrants from entering the U.S., it is not having a noticeable effect on immigrants residing here.

Passel offered several possible reasons why Mexican immigrants are not returning to their country of origin amid the current economic crisis.

“A significant share of undocumented immigrants in the U.S. are here with their families,” Passel told CNS. “The stereotype of the 18- to 40-year-old lone male entering the U.S. for employment is simply not there. It only accounts for one-fourth of the undocumented population. It may not be as simple to return to Mexico because they also have their families with them.”

Passel also pointed out the increasing danger and monetary costs involved in crossing the U.S.-Mexican border.

“Over the last decade, it has gotten considerably more expensive to pay smugglers and dangerous to come over, so families may tend to stay where they are, whether it be in Mexico or settled in the U.S.,” he said.

Emigration totals from the same Mexican survey show anything but a steady rate of emigration to the U.S.

For Shamasunder, the current decrease in immigrants entering the U.S. can provide her organization and others time to concentrate on the immigrant population already present in the U.S.

“It’s a good opportunity to focus on integrating those already here and create more opportunities for them,” she told CNS.

According to the Pew study, the U.S. is the destination for nearly all people who leave Mexico. The study stated, “Mexico is by far the leading country of origin for U.S. immigrants, accounting for one-third of all foreign-born residents and two-thirds of Hispanic immigrants.”