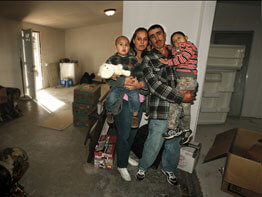 TULSA, Okla. – Sergio Garcia is a man who has taken a tremendous risk – and lost.

Garcia and his wife, Lola, are illegal immigrants from Mexico. Because of a new Oklahoma state law, they made the difficult decision to give up the dream they have worked toward for the past eight years and planned to return to their hometown Dec. 7.

The Oklahoma Taxpayer and Citizen Protection Act of 2007, which took effect Nov. 1, makes it a felony to knowingly harbor or transport an illegal alien and creates specific barriers to hiring illegal immigrants.

It requires proof of citizenship to obtain certain government benefits and requires all state agencies and contractors to check the immigration status of all workers after July 1, 2008.

The Garcias were leaving behind a house they bought and renovated; Sergio’s job as a bricklayer; close family ties in Tulsa; and the beginnings of a better life in America. Their two children, Hector, 2, and Sergio, 5, both U.S. citizens by birth, were going with them to Tlachichila, Zacatecas, a town of about 3,000 people in central Mexico.

In an interview with the Eastern Oklahoma Catholic, Tulsa’s diocesan newspaper, before they left town, Garcia said he was grateful for having had the opportunity to work in the United States.

“We have met a lot of good people here. We won’t remember the bad ones,” he said. “We are just disappointed with the law. With the money I saved, I bought the house. It was a dream that we had, but not anymore.”

His brother-in-law, Guadalupe Ibarra, who planned to drive the Garcias back to their mutual hometown, said: “Most immigrants are not bad people. If they want to eliminate the benefits, that’s fine. Just let us work. I would help them deport the drug dealers and the ones who drink and drive.”

Although he came to the United States illegally himself, Ibarra was able to take advantage of the Reagan-era Immigration Reform and Control Act of 1986. Both he and his wife, who is Garcia’s sister, are naturalized citizens.

The Garcias came to the U.S. in 1992 the way many immigrants did at the time: dodging cars as they ran across Interstate 5 into San Diego. Sergio Garcia found work in Chicago as a bricklayer, and then returned to Mexico, where he and Lola married and returned to Chicago to begin their life together.

The work in Chicago ended about 18 months ago. About the same time, a house burned across the street from the Ibarras’ home in Tulsa, and the couple urged Garcia and his family to buy the house.

Garcia found work as a bricklayer. He spent most of his life savings on what was a shell of a house and spent the rest of his money and most of his free time making it livable for his family. The house passed final city inspection at the end of November.

“I’ll go to Mexico with about $500,” he said. “I want to leave because my record is clean. I want to try to come back legally someday.”

He and his family will live with his parents in Tlachichila until they can get back on their feet.

Ibarra, a supervisor for a large plumbing contractor in Tulsa, holds the title to the reconstructed house, and he will try to sell it. But it is an area where houses don’t sell quickly.

According to Ibarra, who visits his hometown once a year, there are no factories in Tlachichila, nor any big stores where someone could find work.

The minimum wage in Mexico is about $5 a day. It is double that amount for skilled labor, and Garcia might earn $50 a week, or $200 a month.

Many commodities are not much cheaper there than in the U.S. Soda pop is $1 per bottle, gasoline is only a few cents per gallon less than in the U.S., and a gallon of milk costs about $3.

Because the Garcia children are U.S. citizens, they will need to obtain dual citizenship before they can attend school or receive services in Mexico. According to Ibarra, that will cost about $500 each. With no job prospects on the horizon for Garcia, he doesn’t know how long the children may have to wait to attend school.

Ibarra has seen other people leave. “There’s nothing more frustrating than to see people leaving brokenhearted because their dreams are gone,” he said.

“This is affecting me as much as any illegal here,” Ibarra said, referring to the fallout from the new law. “I have to deal with it every day. I believe that the law is bringing back racism. Right now, you can feel the racism on the street.”