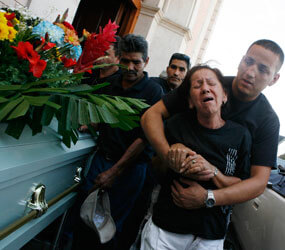 MEXICO CITY – The executions of 18 young men during a prayer service at a Mexican drug rehabilitation center Sept. 2 failed to surprise many church and public safety officials, who say Mexico’s drug cartels increasingly are luring vulnerable youths into lives of addiction and crime.

“Every day there are more young people” involved in the drug trade, said Father Jose Jesus Mata Trejo, spokesman for the Archdiocese of Chihuahua, to the south of Ciudad Juarez, where the executions occurred.

He said the cartels target vulnerable young people with few economic opportunities, “pay them in cash and drugs,” and are developing domestic markets for drugs due to difficulties in smuggling illegal merchandise across the Mexican-U.S. border.

Investigators say gunmen interrupted the evening prayer at El Aliviane rehabilitation center Sept. 2, lined up the participants and opened fire with assault rifles. No motive has been given for the attack, but it occurred in a Ciudad Juarez neighborhood located mere blocks from a busy bridge that links the border city with El Paso, Texas.

The attack compounded the misery of organized crime violence in Chihuahua, where more than 1,200 people have been killed so far this year. Analysts say the northern state is a key corridor for running drugs to the United States and importing weapons into Mexico.

The trend of cartels recruiting young people with substance abuse problems appears to be spreading to other parts of Mexico.

Father Andres Larios, spokesman for the Diocese of Apatzingan in the western state of Michoacan, said a local cartel known as La Familia Michoacana has recruited from a drug rehabilitation center that was operated by the cartel itself.

Father Larios said the cartel – which condemns drug use among its members – targets uneducated young people for work as enforcers and drug runners, while those who finish school often have no other job prospects and move into administrative positions with La Familia.