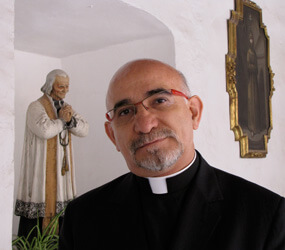 MEXICO CITY – Saying that falling Sunday collections have left the Archdiocese of Leon, Mexico, unable to pay the medical bills of its infirm priests, Archbishop Jose Martin Rabago has called on Catholics to continue supporting the church financially in spite of the current economic crisis.

Archbishop Martin told reporters Aug. 23 that the archdiocese had an $18,000 deficit during the first half of 2009 as collections fell. He said financial projections show the deficit would grow to more than $85,000 by the end of the year.

He also disputed media claims that the church is flush with financial resources.

“The church traditionally gets by with what people give to it,” he said. “There’s no bonanza, in spite of what’s said.”

The archbishop is hardly alone in confronting budget issues caused by falling donations. Smaller Sunday collections and fewer donations from individuals have left parishes and dioceses across Mexico unable to cover expenses such as payroll, building upkeep and even benefits for prelates.

Declining donations reflect the current tough economic conditions in Mexico, which economists have compared to some of the worst financial crises of decades past that devastated middle- and low-income families.

The Mexican government projects the economy will sink by 7 percent in 2009. The decline, the government explained, was aggravated by the H1N1 virus outbreak in April.

Meanwhile, the Bank of Mexico reported, the value of remittances sent home by migrants living abroad shrunk by nearly 18 percent between May and August.

Father Jose de Jesus Aguilar, director of radio and television for the Archdiocese of Mexico City, told Catholic News Service that, except in some upscale neighborhoods, donations are down by between 30 and 50 percent at parishes throughout the capital.

Fewer donations, coupled with reduced income from baptisms, first Communions and weddings, have led to layoffs, cuts in charity projects and even the abandonment of some parishes, which in Mexico are funded almost exclusively by contributions from churchgoers.

Father Aguilar added that insufficient donations pose a challenge for the church even in prosperous times.

“People in the Catholic Church don’t have the custom of giving tithe, unlike other denominations,” he said.

“If one Sunday people have the resources or the desire, they might give something.”