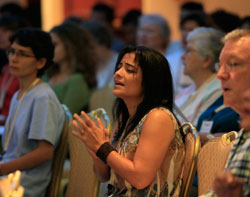 WASHINGTON – Mauricio Farah Gebara, an official with the National Commission of Human Rights in Mexico, praised the Catholic Church in Mexico and in the United States for their “outstanding work on behalf of immigrants and their families.”

Farah Gebara, executive director of the commission’s fifth division, made the comments in a speech July 31 as a part of the 2008 National Migration Conference held July 28-31 in Washington.

The church is “a source of much needed relief and hope for people so vulnerable, and at the same time, so necessary for the well-being of us all,” said Farah Gebara.

The National Commission of Human Rights is an independent group that works in Mexico to help guarantee human rights for migrants. It works with individuals trying to cross into the U.S. as well as those entering Mexico from Central America.

It also issues policy recommendations to all levels of government in Mexico on how the government can improve immigration policies and human rights in the country.

“Through the recommendations, we have demanded to bring to justice government officials for cruel and humiliating treatment of immigrants, lack of due process, aggression, extortion and corruption, and for inadequate conditions at detention centers,” he said.

Farah Gebara examined Mexico’s relationships both with Central America and the U.S.

“Trade and finances have no borders. The search for survival and a better life has no borders either,” he said. “That is why protection of the rights of immigrants and their families should not have borders of any kind.”

He also spoke at length about human trafficking, an issue he described as “one of the greatest human tragedies of our time.”

He explained that the commission educates the general public about human trafficking but also has set up a program to inform individuals who could become victims of human trafficking about how they can avoid such a situation. People trying to get to the U.S.-Mexican border are often vulnerable to human traffickers.

Farah Gebara looked at the upcoming U.S. presidential election as an opportunity for renewal. He expressed a desire for the new administration to work with the Mexican government to create “basic shared principles.”

He recommended several principles, starting with a recognition that the migration of people to the U.S. is not “a temporary or marginal phenomenon,” but one that is necessary and will continue.

Farah Gebara noted multiple news reports July 31 suggesting the number of illegal immigrants coming into the U.S. was on the decline, but Farah Gebara said the facts “show that since 1994 undocumented migration to the U.S. has not diminished.” The contradiction in statistics proves it is difficult for the government to track immigrants under current policies, he said.

He said government officials need to “stop denying the reality of immigration” and stop punishing immigrants, and suggested that “managing immigration” would provide legal channels to bring undocumented immigrants “out of the shadows” so the government will know how many there are, who they are and where they work.

A “good labor policy” and legal immigration channels will do more than “a hundred miles of a border wall or thousands of Border Patrol agents” to ensure the U.S. has the workers it needs and that Mexico preserves its “human capital,” he said.

“When the American demand for an abundant and cheap labor force is not legally met, the door to the undocumented labor market is opened, a market that is both encouraged and condemned,” he said.

Finally, he proposed that immigration “no longer be part of the security and terrorism agenda. Instead, it should be in the agenda where it naturally belongs: that of development, human rights and international cooperation.”

That remark was met with sustained applause from the conference attendees, forcing Farah Gebara to pause before continuing his speech.

“Immigrants are not an obstacle for a better future. On the contrary, immigrants are the most dignified and promising face of our global journey,” he said.

The migration conference, which was attended by more than 850 people, was co-sponsored by the U.S. Conference of Catholic Bishops, the Catholic Legal Immigration Network, Catholic Charities USA and Catholic Relief Services. The theme was “Renewing Hope, Seeking Justice.”