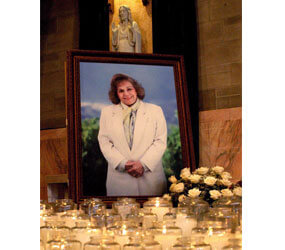 METUCHEN, N.J. – The sainthood cause has formally opened for Maria Esperanza Medrano de Bianchini, a Venezuelan woman believed to have seen 31 apparitions of Mary who spread worldwide a message of family reconciliation and fraternal unity that she said Mary relayed to her.

“We gather together as a people filled with faith believing in the gift of God,” said Bishop Paul G. Bootkoski, who presided at the ceremony and bilingual Mass at St. Francis of Assisi Cathedral in Metuchen Jan. 31. “We believe God gives us men and women of fine example who show us the way to Jesus Christ.“Today, we begin the cause for Maria Esperanza, a woman of faith and we pray as this faith community that God will recognize her through his church as one of his saints,” he said.

The Mass, which was concelebrated by 29 priests, drew more than 1,100 people, including family members, a 60-member choir and others from Bianchini’s native Venezuela. Approximately 300 people watched the simulcast in a nearby hall.

Bianchini reportedly first saw an apparition of Mary in 1976, but she became a world-renowned figure after Mary reportedly appeared to her and 150 others at a farm named Finca Betania in Venezuela on March 25, 1984. Mary is said to have appeared under the title “Mary, virgin and mother, reconciler of all people and nations.”

The apparition was deemed valid by Bishop Pio Bello Ricardo of Los Teques, Venezuela, in 1987.

A biography of Bianchini, who died in New Jersey in 2004 after a long illness, notes she was endowed with the “gift of healing, the gift of counsel, discernment of spirits, visions, locutions, ecstasies, levitation, the odor of sanctity, the stigmata … and the ability to read the hearts of others.”

An ecclesiastical tribunal has been established to gather witnesses, documents and other evidence to determine the holiness of Bianchini.

The process will include gathering hours of testimony from more than a hundred witnesses, said Lori Albanese, diocesan chancellor and notary. The questioning of witness began Feb. 8.

A theological commission will specifically search for anything about Bianchini that is contrary to faith and good morals. A historic commission will gather unpublished writings by Bianchi as well as all historic documents.

During the ceremony in the cathedral, her husband, Geo Bianchini, thanked the diocese, the tribunal and the congregation for their devotion to her.

He said he was grateful to God for allowing him to be a part of her life and emphasized the importance of her mission for unity and family.

“Let’s follow her example. Let’s keep that treasure inside of us so we may become new beings, what God really wants us to be,” he said through a translator.

“We continued to be mystified by the life of Maria Esperanza,” said Father Timothy E. Byerley, a Camden priest who is vice postulator of her cause. “She wanted to teach us the way of love, the Gospel of love. If you want to know about her life, that was it.

“It is the mission, the message of fraternal unity and family reconciliation. When Our Lady came to Betania in 1984 that was the message, when the family’s healed, society’s healed,” he added.

Father Byerley, who met Bianchini through friends who invited her to speak at Marian conferences in New Jersey, thanked those gathered for the Mass.

“You, the faithful, have made the pilgrimage,” he said. “She taught you the way of love, and most of all she loved you, that penetrating even life-changing love that the great lovers of the Gospel always have.”

Following the ceremony, Coromoto Bianchini, one of Bianchini’s daughters, said she only realized how special her mother was when she ventured out into the world.

“Since we were kids we were living among the supernatural,” she told The Catholic Spirit, newspaper of the Metuchen Diocese. “We understood the world differently.”
Maria Gracia Bianchini, another daughter, said the ceremony “was like a dream” and emphasized her mother’s desire to strengthen the bonds of family.

“Families need to forgive each other and start imitating the Holy Family,” she said. “That’s what she taught me, to follow the steps of Jesus.”

Born on Nov. 22, 1928, Bianchini was the mother of seven children and grandmother of 20 children. In 1979 she created the Betania Foundation, a lay movement designed to evangelize, educate and develop the well-being of society and family life and promote social justice. Her family continues the mission of the foundation.

Bianchini died after a long illness on Aug. 7, 2004, at age 75 at a private residence in Long Beach Island, which is in the Trenton Diocese.

However, Trenton did not have the resources required to carry out a canonization cause, Father Byerley explained. With the approval of Trenton Bishop John M. Smith, competence to do so was transferred to the Metuchen Diocese.

In general, two miracles must be accepted by the church as having occurred through the intercession of a prospective saint, one before beatification and the other before canonization.