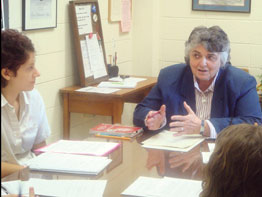 She has been the president and principal of Baltimore’s Mercy High School for 31 years, and may have held such a position longer than anyone else in Catholic secondary education. But, Sister Carol Wheeler, R.S.M., somehow retains the creative energy, freshness and vision she had when she came to the newly opened Mercy as a teacher in 1961 and when she became principal in 1977.

While demurring modestly, though, she tends to attribute all that is positive about herself and in her school to its strong roots in the tradition of the Sisters of Mercy’s remarkable founder, Catherine McAuley who insisted that “together with our co-workers and those we serve, we endeavor to model mercy and justice.”

That, said Sister Carol, is the spirit in which the Mercy students are taught both academically and in equipping them for life in other ways.

The native of Mobile, Ala., fondly remembers running into a recent Mercy graduate, a young black woman who was teaching first grade in a Baltimore inner-city school.

“She told me, ‘I bring Mercy into my classroom every day,’” Sister Carol said, “and that meant to me that we had done something right. It made my day.”

Sister Carol, who was honored April 10 by the archdiocese’s division of Catholic schools for her 40 years of service to Catholic schools. believes Baltimore is “very fortunate” to have so many fine Catholic secondary schools and she is admittedly biased toward single-sex education for girls.

“I think it’s simply because they have to do everything themselves, and they’re not deferring to boys in the classroom or in leadership roles,” she explained. “They have more advantages.”

Although her administrative position keeps her extraordinarily busy, Sister Carol, who entered the Mercy order in 1959, still insists on teaching, even if it is only one course, an “Introduction to Philosophical Thinking.”

“When I teach, it brightens my day,” she said.

It is a labor of love.

“The students as students are still adolescents, but they’re fun and funny, and exciting and full of surprises,” Sister Carol said. “I love working with them. I’ve always enjoyed them.”

When she looks back to the early days of Mercy, in the 1960s and 1970s, she doesn’t see a radical difference in her students, only to the extent that society has changed since then.

But she realizes and is in tune with the fact that the young women “deal with more things today than before, and they’re often hard things. They’re exposed to so much more,” she said.

Mercy’s commitment remains to the students’ parents. “After all,” she said, “we’re still dealing with underage kids.”

Mercy High School’s success (it is among other things recognized as an “Exemplary School” by the U.S. Department of Education) is due in large part to the “excellent” faculty she has been able to attract.

Of the school staff of some 73 professionals (faculty, coaches, maintenance), some five to eight leave each year, not an untypical attrition rate in secondary schools today.

“I don’t see that as a bad thing, though,” Sister Carol said. “That way we get to hire people who have fresh or new ideas and who are looking at what we’re doing cold, from a more objective point of view. It helps us from becoming stale.”

If there was a major turning point in all her years as principal of Mercy, it was in 1992 when she made the decision to spend what was then a lot of money on the development of a computer lab.

“We had a very innovative woman on the faculty then who proposed the idea,” Sister Carol recalled. “I said to her, ‘How much?’ and she told me $30,000. We didn’t have it. The budget was tight. But I believe in taking risks.”

“I told her to have the computer lab up and running by open-house time. And so we did.”

The then relatively new technology made a huge difference, Sister Carol said, keeping Mercy abreast or even ahead of most sophisticated secondary schools.

But even more than technology, Sister Carol believes it is the Mercy sense of welcome and belonging that provide the right environment for the young women to learn how to become the best they can be in the field that is most appropriate for them.

“It’s a matter of leadership,” she said, “of helping the girls find out just what that means for them as individuals. We don’t try to force the kids into a mold. Each one is an individual person, but not an isolated person; she is part of a community, and she is led into service for other people and working for other people.”

Sister Carol’s particular passion about education, however, is represented in what she calls a “risky word.” It is power. Her definition of the word, though, does not carry the sometimes negative connotations usually associated with it. Rather, she sees it as a positive force for good when invested with the right intentions and with faith.

Sister Carol explained her fondness for her understanding of “power” a few years ago at a conference of the Mercy Secondary Education Association, of which she was the founding president in 1981. The association was formed to provide linkage and communication among educators in the more than 40 Mercy secondary schools throughout the United States, Latin America and the Caribbean. Mercy Baltimore is also linked with Mercy secondary schools in other parts of the world, most notably in Ireland, England, Australia and New Zealand. As in all these schools, Mercy Baltimore is “committed to educating young women of confidence and competence, with belief in their power to make a difference in the world as women of faith, justice and compassion,” Sister Carol said.

Power, as the Sisters of Mercy understand it, Sister Carol said, has been the driving force behind the association from the very beginning.

Sister Carol recognizes that the notion of power is a troubling one.

“In spiritual literature we are often warned against power, against exercising it, even sometimes are urged to give it up,” she said. “And, indeed, we have seen, even experienced, terrible misuse of power – both in massive, large-scale ways and in smaller ways in our own daily experience. And if we are honest, we would no doubt have to admit that we ourselves on occasion have been at least tempted to use power in ways of which we would not be proud, because as teachers we hold enormous power over the students who have been entrusted to us.”

The linkage and communication that the Mercy Secondary Education Association has formed and which it continues to strengthen forms the basis of the power of which Sister Carol speaks. It is “the power in our common tradition and history, the power inherent in our extraordinary blessing.” It is, she said, “our responsibility to recognize this power and to use it for the sake of empowerment of others.

“What better context in which to do this than the incredibly important context of educating young people for the sake of the future of the world,” she said.