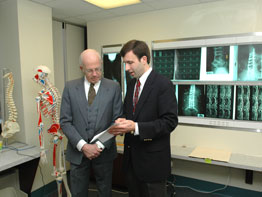 At some point, every avid road racer has to deal with aches and pains, let alone injury.

Few are as well-equipped to tend to those matters as Dr. Charles C. Edwards II.

In addition to being an accomplished marathoner, Dr. Edwards is a surgeon and research coordinator with the Maryland Spine Center, which operates under the auspices of Mercy Medical Center.

That mix was cemented at Washington & Lee University in Lexington, Va., where he was an honors graduate in engineering but decided to follow his father’s calling. The elder Dr. Charles C. Edwards is the director of the Maryland Spine Center, which gained his son in 2003.

“I had to decide between engineering or medical school,” the younger Dr. Edwards recounted. “This is a nice marriage of each of those perspectives. I’m dealing with the structure and mechanics of the body, and our goal is to restore people to normal functioning.

“With respect to orthopedics and the spine, it’s good to have a background in athletics.”

At the Gilman School, Dr. Edwards was the Maryland Scholastic Association champion in track’s 3,000 meters in 1988, and he still holds the Washington & Lee record for the 10,000 meters.

In autumn 1991, he qualified as an individual for the NCAA Division III cross country championships, and weeks later ran his first marathon in 2 hours, 40 minutes.

Olympic venues have provided satisfaction in both his vocation and avocation. Dr. Edwards was interning at a trauma center in Atlanta in 1996, when he treated a victim of a bombing that disrupted the Olympics. Two years ago, he and Dr. Spiro Antoniades, the associate director of the Maryland Spine Center, ran the Athens Marathon.

“I usually train early in the morning, by myself, but on Thursdays, I swing by Spiro’s house and we run to work,” said Dr. Edwards, a Towson resident.

His described his patients as falling into one of three categories: the young, who may be dealing with a spinal deformity like scoliosis; people approaching middle age, who are starting to develop what he calls “gray hair” on spine issues; and those dealing with injuries.

“The commonality is that everyone wants to get back a functioning life,” he said. “Whether you’re a high-level athlete, playing with your grandchildren or walking in the mall, I appreciate that desire.”

Dr. Edwards entered the Half-Marathon at the Baltimore Running Festival Oct. 12, a training run for the U.S. Marine Corps Marathon in Washington, D.C., Oct. 27. He can still run a marathon in less than 3 hours, and at age 38, he appears primed for Masters 40-and-over competition.

“Physicians appreciate the value of fitness,” Dr. Edwards said in late September, the day after a 22-mile training run. “A profession like ours can be intense, and it’s good to have time to think without a pager or a cell phone, even the wife and kids. It’s helpful to restore balance.”