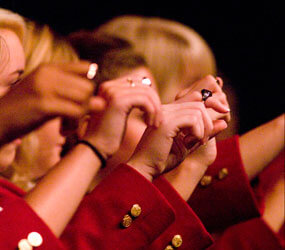 The significance of those rings took on an even greater meaning as senior Brittany Baird received her ring with her classmates Sept. 21. During a ceremony, Brittany delivered a speech on behalf of her classmates about how the Mercy ring would open doors for her.

Eileen, Brittany’s grandmother, and Stacy, her mother, were near tears inside The Harry and Jeanette Weinberg Auditorium.

“You just can’t know what a proud moment that was, to see her stand up there with all that confidence,” said Eileen, a member of the 1965 class. “Four years ago, she wouldn’t have said ‘boo.’ It’s the rich history of this school. If you don’t leave here after four years thinking you can conquer the world and kill the dragons, something’s wrong.”

The Bairds are the first Mercy three-generation family in the all-girls school’s 50-year history. The school’s landmark anniversary was celebrated Sept. 21 with a Mass that coincided with Mercy Day, which celebrates the Sister of Mercy order’s founding by Mother Catherine McAuley.

“It feels like I’m carrying on this giant legacy,” Brittany Baird said. “I really wanted to try and make them proud, and at the same time, make a name for myself. Mercy has become my home. To be a senior and to know I’ve had such wonderful women come before me and wonderful women who will come after me is really something you feel.”

“It took great courage for the Sisters of Mercy to enter into such a venture as starting a high school,” Bishop Madden said. “This brave act let all of Baltimore and all the world know that the charism of Catherine McCauley … was very much alive and vibrant.”

At the conclusion of Mass, the school’s first principal, Mercy Sister Michelle Carroll, spoke to the school community via a taped message. She remembered standing in the school’s front lobby on the first day to greet students.

“This is a very special day for all of us,” Sister Michelle said. “We celebrate with thanks, with joy and a trace of awe. Can it be right that Mercy High began 50 years ago?”

Many of the school’s faculty from the first four years came to Mercy Sept. 21. Mercy Sister Joannes Clifford has worked in the school in some capacity all 50 years and has a near-encyclopedic memory of Mercy graduates.

“I love the spirit of the school,” Sister Joannes said.

Jim Oakey, president of the school’s board of trustees, said his daughters and other girls were transformed into women at Mercy.

“It’s just unique,” Oakey said. “The important thing is to keep it going.”

Also in attendance was Mercy Sister Mary Ferdinand Tunis, who designed the Mercy shield and ring. Mercy Sister Carol E. Wheeler, Mercy’s president, arrived at the school to teach during its second year. During the ring ceremony, she reminded the seniors of their responsibility to work for justice and mercy in the world.

“When you decided four years ago to come to Mercy High School, you became a ‘Mercy girl,’ not just a student of any school,” Sister Carol said. “Being a ‘Mercy girl’ is special.”

Their rings might not ever come off, past graduates said.

“We all do wear our rings,” said Stacy Baird, class of 1988. “It’s not just for a Mercy event. There’s a community, a whole sisterhood.”