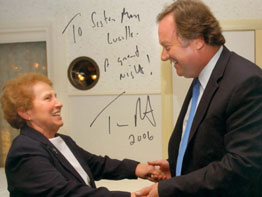 ERIE, Pa. – Days after being thrust into the national spotlight, Sister Lucille Socciarelli said she is grateful to be a Sister of Mercy.

“That is how I met little Timmy Russert,” said Sister Lucille, Russert’s seventh-grade teacher at St. Bonaventure School in Buffalo, N.Y., in 1963.

“He was one of the blessings of my 55 years as a Sister of Mercy,” she said in an interview for Catholic News Service.

Russert, NBC News Washington bureau chief and moderator of “Meet the Press,” died of a heart attack June 13. He often credited Sister Lucille as the person who steered him toward a career in journalism when she tried to channel his boyish energy into editing the school newspaper, The Bonnette.

The close friendship between the two placed her on the national stage during Russert’s funeral as she spent time with Russert’s family and spoke at a memorial at the Kennedy Center in Washington June 18.

Russert, she said, often made her part of his entourage at signings of his books or speaking engagements. She recalled memorable summer days with the Russert family on Massachusetts’ Nantucket Island and having stone-skipping contests in the ocean with Russert’s son, Luke, then 8 years old.

Sister Lucille, who belongs to the Mercy sisters’ New York, Pennsylvania and Pacific West community, is a chaplain at Charlton Memorial Hospital in Fall River, Mass.

Two Mercy sisters from Buffalo who were visiting her told her of Russert’s death the afternoon of June 13.

“I was devastated,” she said.

That night, she received a telephone call from “Big Russ,” Russert’s father who was made famous in the younger Russert’s 2004 book, “Big Russ and Me.”

“He told me, ‘I lost my boys,’” she recalled. She explained that he was referring to Tim and Bill, a son-in-law to whom Big Russ was close who died in May.

She also received a call from former NBC News anchor Tom Brokaw, a longtime friend, who told her, “We lost a great one; we lost a friend.”

Sister Lucille flew to Washington to be with Russert’s wife, Maureen Orth, Luke and the rest of the family. She said she had gone to comfort the family and instead they ended up comforting her and making sure that she had all that she needed.

She attended the wake at St. Alban’s School June 17 and the funeral Mass June 18 at Holy Trinity Church in the Georgetown section of Washington.

“(The Mass) made you so proud to be Catholic. It reflected the richness of our faith and history,” she said.

Sister Lucille sat with Russert’s family at the Mass and heard Brokaw tell mourners before the liturgy that Russert was comfortable in anyone’s house, but he was most comfortable in the house of the Lord.

She said that she was “personally privileged” to be asked by Orth to speak at a memorial for her husband at the Kennedy Center. Sister Lucille said she was chosen because she offered a different perspective in knowing Russert before others did.

She added that it was ironic that she was eulogizing Russert, because the arrangements she planned for her own funeral listed Russert as the one to eulogize her.

On stage with celebrities and before a national television audience, she recounted her personal memories of Russert and closed by saying that she could picture God saying, “Here’s little Timmy Russert. You’re in heaven now, Tim, where every day is ‘Meet the Press.’ Welcome home.”

She had high praise for the way Luke Russert handled himself during the difficult days after his father’s death. She said the photo of Luke with his head bowed touching his father’s chair on the set of “Meet the Press” with the dome of the U.S. Capitol in the background reminded her of a young John Kennedy saluting the casket of his father, President John F. Kennedy.

After hearing Luke Russert speak at the Mass and memorial, she said that she could imagine Tim Russert with great respect quoting Scripture, “This is my beloved son in whom I am well pleased.”

For now, Sister Lucille said she plans to keep in touch with Russert’s family and remember her former student as smart, thoughtful and compassionate.

“When he talked to you, he always made you feel that you were the most important person there,” she said.

As a law student at Jesuit-run John Carroll University in Cleveland, Russert had sent Sister Lucille a note that read: “One nun can make a difference and I can say that you made a difference in my life.”

Russert often credited the Catholic education he received from the Sisters of Mercy and the Jesuits with his success in faith and in life.

Sister Lucille said she told the Jesuits at Canisius High School in Buffalo: “You guys got him in high school, but we formed him and you built on that.”