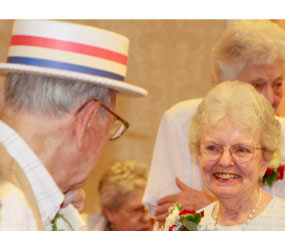 TIMONIUM – When Mercy Ridge Retirement Community celebrates, it does so in style.

He’ll tell you coming to Mercy Ridge was one of his best decisions, not an uncommon sentiment.

“I was just so impressed, just from walking in the front door,” he remembered. “I found that the residents and the staff are just so friendly, warm and welcoming. I said ‘This is where I want to be.’ ”

Betty Klare moved to Mercy Ridge 10 years ago after her husband died. She visited the exhibition house and was wowed by her surroundings.

“I said, ‘Gee, this is like living in a country club,’ ” Klare said. “It’s practically perfect.”

Chatard’s wife was ailing when he moved and admits that life around the house would have eventually become difficult.

“Men are generally not good housekeepers,” he said self-deprecatingly. “I knew my wife was going to pass on and either I learned to be a good housekeeper or go someplace where they do it for me.”

Mercy Ridge is a joint venture of Mercy Health Services and the Archdiocese of Baltimore and is managed by CRSA (Cooperative Retirement Services of America).

A waiting list, made up of current Mercy Ridge residents and others from outside the complex, is a result of word of mouth and success by the Mercy Ridge staff.

“It enhances the quality of the residents,” Oxx said. “They don’t have to eat in the same restaurant every night.”

Oxx said many people enjoy the performing arts center on campus, along with the pool and theater. Klare said she regularly uses the exercise facilities, whether at 5:30 a.m. or in exercise classes.

“I always say exercise is better than medicine,” she said.

Although both Chatard and Klare are still in the retirement community, they see their friends in St. Stephen’s Green regularly.

“Many of them come over for religious services,” Klare said.

Klare and Chatard have seen the Mercy Ridge community build over 10 years and are proud to be part of it.

“To me, the best part of it is the diversity here,” Chatard said. “There’s a real diversity of people and personalities. We have a habit here of saying hello to everybody. It’s a real community. Anybody will do anything for anybody else.”