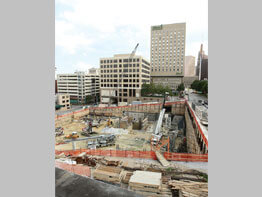 Its outreach and impact have always been formidable.

Now Mercy Medical Center is about to get an edifice just as impressive.

Mercy broke ground last month on a project that will cost nearly a half-billion dollars. Projected to be completed in 2010, the Mary Catherine Bunting Center will strengthen not just Mercy’s mission, but an important north-south corridor in Baltimore City.

“At the end of the day,” said Thomas R. Mullen, the president and CEO of Mercy Health Services, “this is going to be a replacement of the total hospital.”

The project is the biggest in Mercy’s history and part of more than $4 billion in current health care-related construction in Maryland.

Much of that investment can be seen in Baltimore.

On the east side, more than $1 billion is being spent at The Johns Hopkins Hospital. Just north of Baltimore’s sports stadiums, the University of Maryland Medical Center is transforming its campus with a $357 million project.

A half-mile north of Harborplace yet unseen by many commuters and tourists, Mercy is in the process of buttressing its downtown presence. The project will complete a decade-long push that Sister Helen Amos, R.S.M., the executive chair of Mercy, recalls launching with a symbolic gesture.

“When we marked our 125th anniversary in 1999,” Sister Helen said, “we took the employees out for two days and cleaned Preston Gardens.”

There were decades when one of the few redeeming aspects to the park was its proximity to the hospital, which traces its origins to 1874, when six Sisters of Mercy opened an infirmary.

While Mercy no longer has a nursing school, its expertise in areas such as women’s health and cancer care have attracted insured patients, complementing its tradition of care for those in need. In expanding its niche, Mercy has aided a downtown revitalization that has spread from the Inner Harbor.

“The development that Mercy Medical Center has undertaken is a tremendous boost for the central part of downtown Baltimore,” said Donald C. Fry, the president and CEO of the Greater Baltimore Committee. “When others see a community leader like Mercy make an investment like this, that can serve as a catalyst.”

When the Mercy project was unveiled in June 2007, the cost estimate was just over $400 million. In September 2007, the Maryland Health Care Commission approved an amended Certificate of Need of more than $489 million, according to Pamela W. Barclay, the director of the Center for Hospital Services at the MHCC.

Given the chilly economic climate, it takes substantial resolve, vision and providence to undertake a project of that magnitude.

“It was a very time-sensitive process,” Sister Helen said. “Given the rise in construction costs and the current state of the financial markets, if we would have lost this (approval) … if we couldn’t have borrowed when we did, it would have taken a miracle.”

Whiting-Turner is the general contractor for the project, which is being funded through the sale of tax-exempt bonds, cash from operations and a major donation from Mary Catherine Bunting, a 1958 graduate of the Mercy School of Nursing and a nurse practitioner for more than 30 years. Her grandfather, Dr. Avery Bunting, founded the Noxzema Chemical Company.

Most will work in a new 18-story tower that will include nearly 300 private rooms, 15 operating rooms and a skywalk to the Pleasant Street garage.

Mercy opened its 117,000-square-foot Weinberg Center in 2003. Not all of the 672,000 square feet in the Mary Catherine Bunting Center, just south of Orleans Street, will be occupied when its shell is complete.

“We are totally replacing all of our in-patient facilities and doubling the square footage on campus,” Mr. Mullen said. “Many institutions have taken an incremental strategy toward replacing their facility. Most replace 100 beds at a time. We’re going for everything.”

The project had a rocky start, as preservationists protested the demolition of row houses on St. Paul Place. Bounded by St. Paul Street on the west and Calvert Street on the east, Mercy Medical Center had but one direction to go – up.