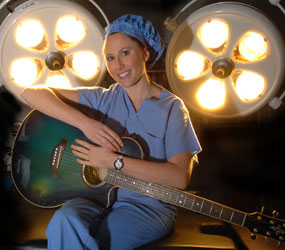 Ten years ago, Jenny Boyle was in a car with her sister, brother and mother en route to their first ski trip. An elderly man pulled in front of the family on the highway, causing the Boyle family to swerve and flip over eight times.

“We definitely had an angel with us that day,” the 30-year-old Springfield, Va.-native said.

Jenny’s mother – Mary Elizabeth – suffered horrific head injuries. At that point, Jenny was a music student at George Mason University, but she dropped out to take care of her mother. She decided to go to a local community college and study nursing.

The lifelong Catholic said: “I think that the accident helped me reevaluate what was important in life. At the time, it was my family, and they took precedent over anything else.”

It was a monumental decision for Boyle. When she was about 3, her mother would work the night shift as a nurse at a local hospital. Jenny’s father would tape record Jenny singing and play it for her mother when she got home from work.

Music had become a singular focus. After the accident, Boyle quit the various bands she was in and began marching toward a career in nursing. Just before the accident, she had followed through on her grandfather’s recommendation to apply to Armed Forces Entertainment, a program that sends musical acts overseas to perform for U.S. troops.

One day, she got a call from the Pentagon asking her to serve the country with her music. Boyle assembled a band quickly and performed overseas during spring break of her last year in nursing school.

“I studied for my nursing board exams while on a C-130 plane on the way to Afghanistan,” she said with amazement.

She went on to do seven tours and has been to nearly 30 countries, including Afghanistan, Kuwait, Djibouti, Germany, Spain, Egypt, Turkey, Portugal, Greece and Japan among other countries.

Boyle talked with troops and often heard stories of girlfriends, wives and children back home. She also visited a German hospital where injured troops were treated.

“There were a lot of people who were in really bad shape,” Boyle said of the hospital. “We’d go into the rooms and half of them didn’t have arms or didn’t have legs. They were just a mess. For me, combining my two professions was extremely moving.”

She found her music could help the troops feel like they were back home.

While she is waiting for her next tour, Boyle has gravitated toward Baltimore. Her boyfriend, Mike Kuhl, is a member of her band and a graduate of Baltimore’s Archbishop Curley High School. Once more pop-country sounding, Boyle describes her music as a mix of rock and soul.

She plays in many Baltimore area clubs, including Federal Hill’s Bertha’s Restaurant. She will perform Feb. 13 at Ram’s Head in Savage at 9 p.m.

In her nursing career, she looks for inspiration from her mother and finds comfort at Mercy.

“Hospitals are cold, scary places, but it just doesn’t have that feeling to me,” Boyle said. “You definitely feel like you have God on your side there.”