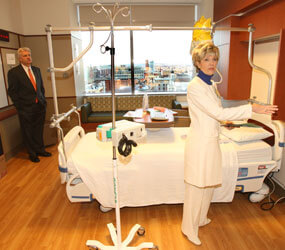 When other city hospitals relocated to the suburbs in the middle of the last century, leaders of Mercy Medical Center made a conscious decision to keep the Catholic hospital in downtown Baltimore.

That historic commitment is being renewed as Mercy is set to open a $400 million hospital tower Dec. 19, replacing the existing tower that was erected in 1963. Rising 20 stories, the Mary Catherine Bunting Center will provide 259 all-private, inpatient rooms, three rooftop gardens and 15 operating rooms.

Other features include four outdoor glowing light towers that honor the 16 Sisters of Mercy who served as president of the hospital since 1874; a skywalk atrium and a computerized physician order entry system.

Weiland said the hospital’s medical professionals were consulted in the design of the operating rooms, nursing stations and other components.

To address concerns about keeping electrical wires off operating-room floors, she said, equipment was mounted on the ceiling.

As the sun rose over Baltimore during the media tour, morning light seemed to bring to life a massive wall of glass inside the Bunting Center’s multi-denominational “Chapel of Light.”

The ethereal structure consists of 20-foot tall, 1,000-pound panels composed of multi-colored sea-glass nuggets. The warm shades of green, turquoise, gold and silver invite a prayerful atmosphere that hospital leaders believe will be a spiritual comfort to visitors.

The chapel, whose curved wall was constructed of Jerusalem stone imported from the Holy Land, includes passages from the Old and New Testaments.

Mullen said the new building pays tribute to the legacy of the Sisters of Mercy. The skywalk atrium enters into a two-story lobby with marble floors highlighting green Mercy leaf crosses that have become the medical center’s symbol.

In a Dec. 9 inter-faith prayer breakfast, Bishop Denis J. Madden said the inscription on the Bunting Center’s 6,000-pound cornerstone is a fitting encapsulation of what the Mercy Sisters mission has been over the decades. It says, “God’s Healing Mercy Embraces All.”

“This house of God’s healing is here to stay,” he said, “and it is here for all.”