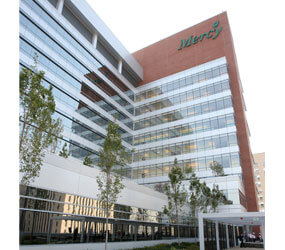 The primary building at Mercy Medical Center in Baltimore was planned in 1959, when Dwight D. Eisenhower was in the White House.

For more than four decades, it received assorted upgrades, but as Thomas R. Mullen, the Mercy president and chief executive officer put it, “it was not in the cards to continue to renovate.”

Those cards, of course, came to include a major gift from Mary Catherine Bunting in Oct. 2007. Her generosity was the cornerstone of a $400 million capital campaign and a 20-story tower in her name that will open Dec. 19 – seven months ahead of schedule and at $347 million, $24 million under projections.

Bunting, a graduate of Maryvale Preparatory School in Brooklandville and a retired nurse practitioner who served at Mercy’s community health center in South Baltimore, is the grand-daughter of the founder of the first Noxzema Chemical Company.

A great contributor to Catholic causes, including fledgling ones like the College of Notre Dame of Maryland’s School of Pharmacy and Cristo Rey Jesuit School in Fells Point, Bunting was honored as the Outstanding Philanthropist of the Year Nov. 15, during National Philanthropy Day in Maryland.

Her vision will greatly enhance Mercy Medical Center, which was founded by the Religious Sisters of Mercy in 1874. It has been operating out of a patient tower on St. Paul Street since 1963, with the adjoining Harry & Jeanette Weinberg Center being built in 2003.

“We’ll gut some floors over time, and re-establish it as an outpatient facility,” Mullen said of the old tower.

The transition into the Mary Catherine Bunting Center, conversely, will move apace the Sunday before Christmas, when the plan calls for approximately 190 patients to be transferred in less than seven hours into the Bunting Center, which will include 259 private patient rooms and 15 state-of-the-art operating rooms.

Patient rooms are divided into three zones, caregiver, patient – including a bathroom with an integrated shower floor – bathroom and visitor, with views that encourage patients to get out of bed and accelerate their recovery, when appropriate.

On the east side of the tower, views include the Francis Scott Key Bridge. On the west side, rooms offer a grand perspective on the Basilica of the National Shrine of the Assumption of the Blessed Virgin Mary.

Enticements to regain mobility include three rooftop gardens, covering 17,500 square feet, on the eighth (labor and delivery), ninth (surgery) and 10th floors. Patients will gain an appreciation of why Mount Vernon has served as a European substitute for Hollywood, in a very green space, environmentally and aesthetically.

Each of the eight patient floors include 32 rooms and three nursing units. Mercy added 135 new full-time employees to support the project, which at the height of construction busied 400 contract employees from Whiting Turner.

Mercy’s timing is fortuitous, as it secured funding before the economic downturn.

“All of us in the business anticipate the day when the rise in health costs is not sustainable,” Mullen said. “That’s why we moved so quickly to build it.”