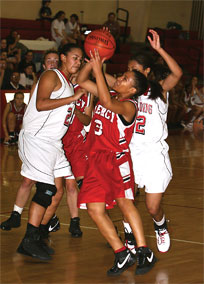 The Mercy Magic are putting up some incredible numbers this season. Out to a remarkable 7-1, IAAM A Conference (Y Division) start, 12-2 overall, (as of Jan. 8) the Magic basketball team is showing signs of being in the hunt for the magical title, just six short weeks away.

Believing in one another’s talent and presence on the floor will bring confidence and that “swagger” that coaches and commentators like to talk about. The Magic are a humble group but nonetheless, they are gaining attention and turning heads.

Led by senior captains Khadija Mitchell and Jessica Zikorus, the Magic are deep enough to run another six to eight ball players in and out throughout the game, keeping fresh legs on the floor, spunk on the bench and broad scoring in the stat book.

The Magic, in second place behind an undefeated Seton Keough High School team, are playing an up-tempo game, pressing where they can, causing turnovers on pressure man-to-man defense, and using their speed to deflect their lack of height underneath.

While the Magic can put up the numbers, blasting their competition, they can also keep a calm perspective under pressure. In a 34-31 win on Jan. 4 over St. Paul’s School for Girls, it was junior Melinda Kane who came off of the bench to contribute 10 of her 12 points in the fourth quarter to lift the Magic to another win.

Coach Marion also commented on point guard Khadija Mitchell’s stellar season thus far. “In addition to all of the usual things Khadija does well, this season she is really able to ‘finish’ for us, and that has been a big help this season.” Whether from the free-throw line, from the top of the key on an outside shot or a dish on a fast-break, Mitchell is making mature, confident decisions and giving her team an added boost.

The Mercy squad had the opportunity this Christmas to compete in a holiday tournament in Cincinnati against nine other Mercy schools. This is the Mercy gathering’s second year in a row, and the benefits were much greater than just the 2-1 record they returned home with. “From the opening liturgy to the receptions after the games, to the mingling at the hotel, it was a wonderful experience for our team,” said Marion.