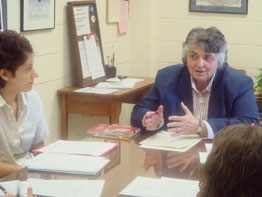 She has been the president and principal of Baltimore’s Mercy High School for 31 years, and may have held such a position longer than anyone else in Catholic secondary education. But, Sister Carol Wheeler R.S.M., somehow retains the creative energy, freshness and vision she had when she came to the newly opened Mercy as a teacher in 1961 and when she became principal in 1977.

While demurring modestly, though, she tends to attribute all that is positive about herself and in her school to its strong roots in the tradition of the Sisters of Mercy’s remarkable founder, Catherine McAuley who insisted that “together with our co-workers and those we serve, we endeavor to model mercy and justice.”

Sister Carol’s particular passion about education, however, is represented in what she calls a “risky word.” It is power. Her definition of the word, though, does not carry the sometimes negative connotations usually associated with it. Rather, she sees it as a positive force for good when invested with the right intentions and with faith.

Sister Carol explained her fondness for her understanding of “power” a few years ago at a conference of the Mercy Secondary Education Association, of which she was the founding president in 1981. The association was formed to provide linkage and communication among educators in the more than 40 Mercy secondary schools throughout the United States, Latin America and the Caribbean. Mercy Baltimore is also linked with Mercy secondary schools in other parts of the world, most notably in Ireland, England, Australia and New Zealand. As in all these schools, Mercy Baltimore is “committed to educating young women of confidence and competence, with belief in their power to make a difference in the world as women of faith, justice and compassion,” Sister Carol said.

Power, as the Sisters of Mercy understand it, Sister Carol said, has been the driving force behind the association from the very beginning.

Sister Carol recognizes that the notion of power is a troubling one. “In spiritual literature we are often warned against power, against exercising it, even sometimes are urged to give it up,” she said. “And, indeed, we have seen, even experienced, terrible misuse of power – both in massive large scale ways and in smaller ways in our own daily experience. And if we are honest, we would no doubt have to admit that we ourselves on occasion have been at least tempted to use power in ways of which we would not be proud, because as teachers we hold enormous power over the students who have been entrusted to us.”

The linkage and communication that the Mercy Secondary Education Association has formed and which it continues to strengthen forms the basis of the power of which Sister Carol speaks. It is “the power in our common tradition and history, the power inherent in our extraordinary blessing.” It is, she said, “our responsibility to recognize this power and to use it for the sake of empowerment of others.

“What better context in which to do this than the incredibly important context of educating young people for the sake of the future of the world,” she said.

Sister Carol is particularly proud of Mercy’s faculty, a group she describes as “very committed and caring about the kids.”

When it comes to teaching, it is not only a matter of strong academics, but one of “reflection and action,” Sister Carol noted.

“That’s absolutely key to helping our girls reach their individual potential so that they are as best equipped as we can make them to become leaders in whatever field they chose and in whatever field is most appropriate for their talents and character,” she said.