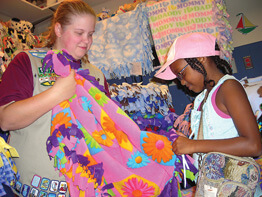 During a recent trip to the emergency room at Good Samaritan Hospital in Baltimore, 9-year-old Kyla Roberts was given a homemade fleece blanket to cuddle with to battle the fear and loneliness children often experience while waiting for treatment.

“It was like my cat, but softer,” the Northwood Elementary School fifth grader said. “It made me not so scared.”

This was the goal of Mercy High School senior Sara Scarborough, who has nearly completed making 100 colorfully-fringed cuddle blankets for the hospital, which began as a service project for her Girl Scout troop at St. Ursula, Parkville.
For her efforts, the hospital awarded the 17-year-old Parkville resident with a certificate of appreciation.

“Sara, you are a star,” said Dr. Al Struck, director of the hospital’s fastER care department, as he presented her with the special certificate and a Good Samaritan Ambassador pin Aug. 24. “You have made a huge contribution.”

Mountains of the cuddle blankets are stored in a corner room inside the busy Northeast Baltimore hospital’s emergency department with typed notes attached telling young recipients who made the coverlets and why.

“When I was a kid, I was in the ER a couple of times and it was a scary time and I had nothing to comfort me,” said Sara, a parishioner of St. Isaac Jogues, Carney. “I wanted to do this to give the kids some comfort, so they wouldn’t be scared anymore.”
The 3-by-4-foot cuddle blankets have been added to a closet full of other donated stuffed animals, crayons and coloring books the hospital gives to children who spend a significant amount of time in the emergency room, especially youngsters who have to be transported to other medical facilities for more comprehensive care, Dr. Struck said.
It’s a practice the hospital has been doing for the past couple of years and Sara’s contribution is among the program’s largest donation and the most for any one youthful giver, he said.

“When children are hurt or sick and come to the hospital in an emergency situation, they are petrified, as are their families,” Dr. Struck said. “This is a little something to make them feel better and they can take away a little part of Good Samaritan with them.”
Sara was inspired to make the cuddle blankets by her Girl Scout troop leader Kim Schisler, who is a nurse in the hospital’s emergency room.

The Hamilton resident and parishioner of St. Michael the Archangel, Overlea, told Sara about the children in the ER and how the stuffed animals comforted them during a very traumatic time.

Fortified with 250 yards of fleece – paid for by Sara’s parents and money she earns at her part-time job – she began making the blankets Memorial Day weekend and had 90 completed by the end of August.

“I’m hoping to have the last 10 finished by the end of September,” she said. “Things are busier with school starting, but I think I can have the whole 100 done by then.”
Sara’s 100-blanket goal is an immense undertaking for any Girl Scout project and Ms. Schisler hopes it will serve as an example for the other girls.

“Sara has really set the bar pretty high,” she said. “It’s going to make such a difference to the scared kids who come through our hospital.”