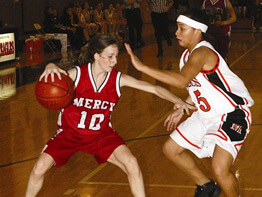 It’s a new year and a new team for the Mercy Magic this season. Returning eight varsity players from 2005-2006, head coach Mary Ella Marion, in her 23rd season, has expanded her roster to 14, bringing up new energy and young talent from the junior varsity this year.

“We’re beating the teams we’re supposed to beat but not surprising anyone thus far,” said Marion.

The team is well-balanced, led by senior captains Lauren Moniuszko and Marcia Bond, both guards.
The team continues to improve as most of Marion’s players are getting significant minutes on the court. The team’s fresh legs, team spirit and hard work ethic are turning the tides for the Magic who, in 2005, finished 8-17 overall.

Defensively, the Magic play a straight man-coverage with backcourt pressure. Offensively, the team has looked to 5-foot-10-inch junior, Jessica Zikorus, a low post player, to jump-start the offense on quick put-backs. Smart underneath, Zikorus is averaging 6.33 points per game and 6.5 rebounds. Zikorus is giving the Magic just what they need with consistent play and tough rebounding.

At the top of the key, look for 5-foot-2 inch junior Khadija Mitchell at the point. Mitchell, a three-year varsity player, is still learning the ropes but is quick and can move the ball efficiently and effectively against pressure.

Both Mitchell and Zikorus were named to the All Tournament Team over the Christmas Holidays at the The Seton Keough Christmas Tournament. The Magic went 2-1 in that tourney, losing in the finals to Seton Keough.

According to Coach Marion, the future looks bright for the team and the program, as the junior varsity squad remains undefeated.

The 42nd Annual “Game” between Mercy and the Institute of Notre Dame, Baltimore, will be held Feb. 2 at the Towson University with the tip-off at 7:30 p.m.