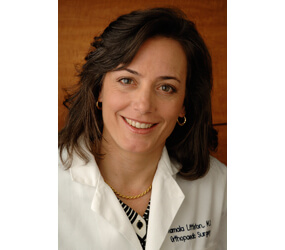 A twist of fate – and a knee – brought Dr. Kamala Littleton to the field of orthopedic surgery.

Dr. Littleton was in her early 20s in 1987, when she rounded third base during a softball game. She realized she missed the bag and quickly turned to correct her error.

Then two years into her career as an engineer, Dr. Littleton stumbled. She later learned that she had torn the anterior cruciate ligament in one of her knees.

“It’s very severe right when it happens,” Dr. Littleton said of the pain. “It’s more a sensation that something’s not right.”

After surgery, she began a lengthy rehabilitation and was fascinated by the process. She enrolled at Georgetown University in Washington and began a new professional journey that has led to her being the director of the orthopedic program for women at Mercy Medical Center in Baltimore.

Each day, Dr. Littleton sees women, many young, who have encountered knee injuries or problems. Doctors at Mercy see tears of the anterior cruciate ligament and patellofemoral syndrome, inflammation between the knee cap and the thigh bone.

Dr. Littleton said the two most common reasons for an ACL tear are sports injuries and new exercise regimens.

ACL tears are often a result of deceleration or a change of direction.

“So, if your joint is not prepared for that type of activity, that’s when the ligaments go,” said Dr. Littleton, 45.

Young women, she said, are about 5 to 8 times more likely to tear an ACL than young men.

Several theories have emerged to explain the divide. Some doctors suggest hormonal and bone shape differences could play a part. Others believe women perform actions differently than men. When they land on the ground, women tend to be more upright.

“We don’t bend our legs as much as guys do,” Dr. Littleton added.

She said another theory is that women’s muscles are just generally weaker than men’s.

“Some hold a little more water than others,” Dr. Littleton said of the theories.

She said people with doubts about knee injuries should seek medical attention if pain persists after ice treatments, rest and anti-inflammatory medication. Dr. Littleton said many don’t perform those basic responses, which can address swelling.

Dr. Littleton said initial evaluations typically begin with an exploration of a person’s medical history. She also asks questions about when and how the injury occurred.

When Dr. Littleton tore her ACL, she underwent arthroscopic surgery. The rehabilitation was lengthy.

Now, doctors perform reconstructions in which tissue is replaced. Rehab is still significant, albeit shorter.

Because of her own knee history, Dr. Littleton has a modified active life. Rather than ski, she rides a horse and snowboards.

Dr. Littleton said post-injury surgery is done after serious consideration. If necessary, she recommends it for women under 50 who lead active lives.

She said people must be conscious of their bodies to avoid costly surgeries.

“I try to emphasize saving money if you can,” she said.